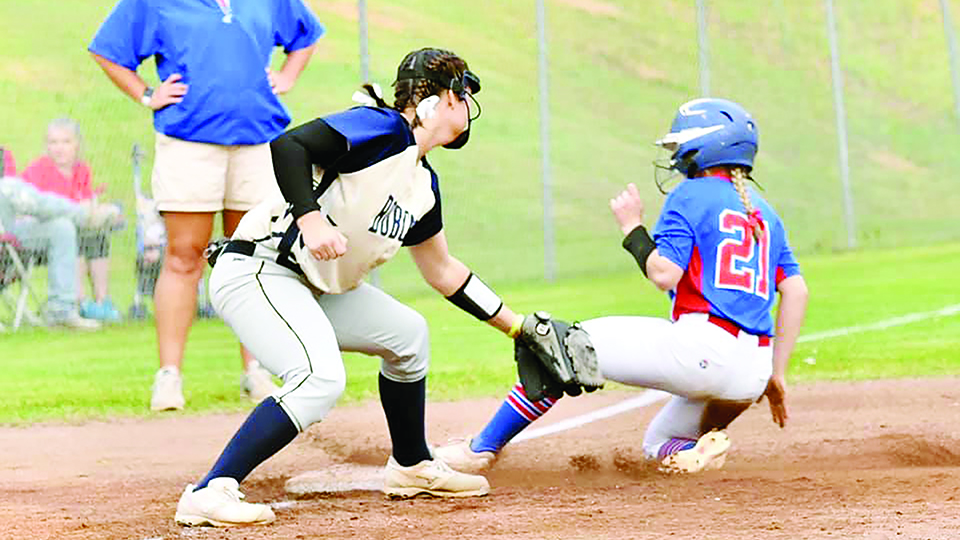 Photo by Stacy Leake Codi Leggett of Bogue Chitto tries to apply a tag to Shelbi Maxwell of Wesson on Tuesday night. The two teams split a doubleheader that was the regular season finale for both squads.

It ended up being a split Tuesday night as two very good softball teams wrapped up their regular season with a doubleheader as Bogue Chitto (14-8-1) visited Wesson (19-3). In game one the Lady Cobras jumped out early to a lead they wouldn’t give up in a 10-3 win. The Lady Bobcats bounced back in game two to squeeze past Wesson 9-7 in the finale.

“We played a lot better in game two,” Lady Bobcats coach Kris Smith said. “We batted better and played better defense. We still have some things that needs to be cleaned up. I was pleased with the way we hit the ball tonight.”

Shelbi Maxwell drew a walk to get the Lady Cobras first baserunner in their half of the first, then eventually stole second. The steal would move Maxwell into scoring procession.

Catherine Wilson took advantage of Maxwell’s steal, as she launched an RBI double into deep left field for the game’s first run.

The Lady Cobras would score one more run before the Lady Bobcats could put an end to the inning.

The Lady Bobcats scored their three runs in the top of the third. Batting with two outs, Karly Leake singled into the right center field. Codi Leggett brought Leake home off a double into right field.

Baileigh Jackson scored Leggett on a double into left field. Julianna Frazier scored the last run for the Lady Bobcats as she nailed a triple into right field.

Melody Ashley would tack on one run for the Lady Cobras in the third with an RBI sacrifice fly into shallow right.

The Lady Cobras added four runs in the bottom of the fourth off an RBI single by Anna Claire Crow and a three-run home run over left field by Crapps as the Lady Cobras went up 9-3.

WAC finished their scoring in the sixth as Crapps hit an RBI sacrifice fly into center field.

Gracie Guynes took the setback for the Lady Bobcats going three innings while allowing five runs and giving up four hits while striking out three. Frazier pitched in relief.

Laynee Crapps picked up the win for the Lady Cobras allowing three runs on 11 hits while striking out seven.

Much like game one, the Lady Cobras took an early lead over the visiting Lady Bobcats in the nightcap. Bogue Chitto saw their bats waking up in the fifth inning as they were able to take away the lead from the Lady Cobras.

Crow scored the Lady Cobras’ first run off an RBI single to start off game two. Crapps scored Crow with a sacrifice ground out.

The Lady Cobras struck again in the second inning getting two runs in off a bases loaded error by the Lady Bobcats.

BC scored one run in their half of the second off an RBI single by Kylie Chapman.

The Lady Cats added two runs in the third off an RBI single by Jackson and a sacrifice fly by Leggett.

Trailing 4-3 heading into the fifth inning, the Lady Bobcats took over the game, bringing two runs across the plate off a two-run single by Frazier.

Bogue Chitto increased their lead in the seventh, batting four runs in off a two-run RBI double by Frazier and a two-run single by Chapman.

Wesson attempted to rally in the bottom of the seventh, getting three runs in off RBI singles by Crow and Wilson and an RBI sacrifice fly by Crapps.

Leggett picked up the win for the Lady Bobcats allowing seven runs — four earned — off six hits while striking out two.

Crapps suffered the loss for the Lady Cobras allowing seven runs — six earned — off nine hits while striking out one. Marley Channell and Kyla Smith pitched in relief.

“We played pretty solid on both offense and defense in game one,” said Wesson coach Michelle Nunnery. “During game two our bats went cold for four innings and that came back to bite us when BC started squaring the ball up.”

Bogue Chitto now matches up with Clarkdale in the opening round of the 2A state tournament. The Lady Cats will play at Clarkdale Friday at 2 p.m. Game two is Saturday at 2 p.m. at Bogue Chitto and if game three is needed it will follow game two.

As region champs Wesson has an opening round bye. The Lady Cobras are awaiting the winner of the Seminary versus Yazoo County matchup.