Sones is Farm Bureau Agent of the Year 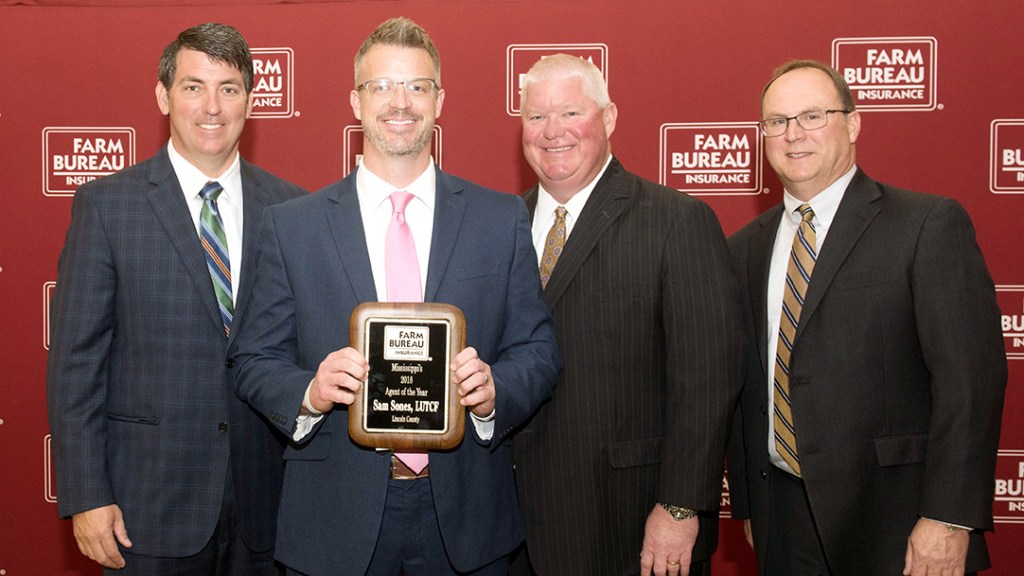 Sam Sones gets up every day and doesn’t go to work.

Being a Farm Bureau insurance agent is not a job for the 35-year-old, it’s an opportunity to serve his community, he said.

Sones, of Brookhaven, was recently named Farm Bureau’s Mississippi Agent of the Year at the annual meeting. Though he shared the award with another agent in 2014, this was his first time winning solo.

He credits his success to God first.

“It’s God giving me favor in situations, most importantly,” he said. “The second thing is, if you love what you do, you’re going to succeed at it.”

The award is based on an agent’s production in sales of auto, property and life insurance and other factors, which are given a numerical value. Farm Bureau uses a best-of-the-best ranking, which measures their production in each area. Those rankings are added together. The agent with the lowest cumulative score takes the district win. The three district winners then go head to head with their scores and a victor emerges. For 2018, the winner is Sones.

“It meant a lot to me because the only other time I’ve been able to achieve it, I co-won it, I didn’t achieve it outright,” he said.

When he turned in his business plan at the beginning of 2018, he put Agent of the Year as a goal. He’s aspired to that before but never so specifically. In 2017, he won the district’s Agent of the Year, but missed the state title by one point. He was determined not to let it happen again.

“Every year it’s an aim, but this year it was definitely a target,” he said.

Sones has sold insurance for over 12 years and has worked for Farm Bureau for just over 11.

He works well with the other agents in his office — Nathan Berry, Nathan Bullock, Gary Myers, Allen Mills and agency manager Ricky Ferguson — and wants them to win Agency of the Year.

Sones and his wife, Brittany, have three children and one on the way — Sammy, 7; Si, 5, and Lottie, 2. Baby Sones is due in November.