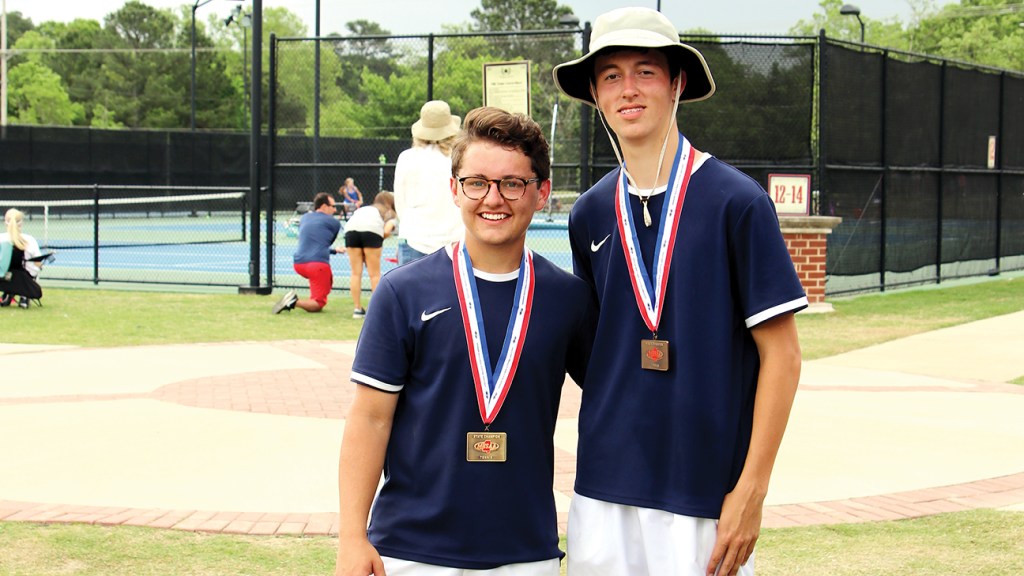 Photo submitted Braxton Wallis and Daniel Panzica are the 5A boys’ doubles state champions after winning the tournament held this week in Oxford. The Brookhaven High School duo captured the second straight doubles title for the school after Panzica paired with Will Moak to win the title last year.

Tuesday in the first round they defeated Germantown’s Reid Lott and Zachary Weaver 6-0, 6-1. Tuesday evening, they played Alan Follis and Taylor Jefcoat from West Jones and again won 6-0, 6-1.  Wednesday morning’s semi-final was against the Stone County team of Triston Hill and Lawson Pearson.  Panzica and Wallis won the first set 6-1 and trailed 5-2 before storming back to take the second set by a score of 7-5.  The final match against the second seeded team of Oren Ladner and Kyle Bond, also from Stone County, was a straight set win 6-4, 6-4.

Panzica, a Jones College signee, teamed with Will Moak to win the 5A title last season.

BHS had six other players participate in the state tournament.  Victoria Sittiq played girls singles and drew the top seeded Mikaila Coleman of Center Hill. Coleman went on to win the state 5A girls singles title only losing a total of seven games throughout the four tournament matches she played. The other BHS boys’ doubles team of Sam Allen and Jonah Clark lost to the number three seeded team of Dawson Childress and Dawson Welch from Lafayette County in their first-round match.

The mixed doubles team of Maddie Boyte and Gray Anding defeated Ridgeland’s Ethan Perkins and Nia Wade 6-1, 6-2 in the first round.  In the second round they won over Hayden Floyd and Ashlyn Rainey from Wayne County 6-3, 6-4.  Wednesday morning in the semi-finals the Lewisburg team of Isaiah Sheffield and Reagan Salter ended their run by a score of 6-2, 6-3.

The BHS girls’ doubles team of Madeline King and Rivers Gray played Cleveland Central’s Caiden Craddock and Sara Mullins.  They handily won that match 6-2, 6-3.  In the second round King and Gray took on the top seeded team of Lainey Cunningham and Anna Stringer from Stone County.  The BHS girls played a great match and fell just short by a score of 7-6, 6-4 to the eventual state champion team from Stone County.

BHS won the team title in Region 6-5A and defeated Picayune in the first round before losing to eventual state champion Stone County in the second round. The Panthers are coached by Nancy Fisher and Becky Green.