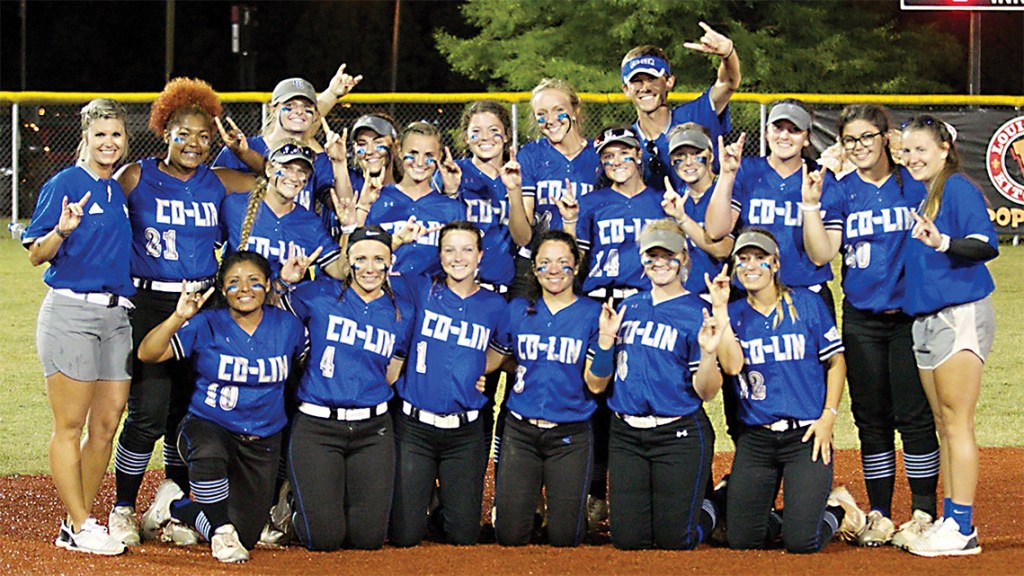 Photo by Co-Lin Athletics The Copiah-Lincoln Lady Wolves (30-15) play today at 4 p.m. against Itawamba (36-12-1) on the campus of Pearl River CC in Poplarville in the first round of the NJCAA Region 23 Tournament. It's the first region tournament appearance for Co-Lin since 2010.

For the first time since 2010, the Copiah-Lincoln Community College Lady Wolves will advance to the NJCAA Region XXIII tournament.

The Lady Wolves defeated the defending NJCAA DII national champions, the No. 3 nationally ranked Jones College Lady Bobcats, in the MACJC State Tournament Monday night, 7-4, to clinch the final region tournament bid. Co-Lin had a thrilling day as the Lady Wolves defeated Southwest 8-5 and cruised by Northeast Mississippi 5-3 before the late-night upset over No. 3 Jones College.

Itawamba faced Pearl River in the championship game with ICC winning the contest 8-0 in five innings. Itawamba hosted the Region XXIII Tournament a year ago, and per the MACJC rules, no team can host for consecutive years, therefore the MACJC runners up, PRCC, will host the region tournament in Poplarville starting on Wednesday. Game times are not set, but as the No. 4 seed, the Lady Wolves will face No. 1 ICC. Pearl River, the No. 2 seed, will face LSU Eunice who enters the field as the No. 3 seed despite being ranked No. 1 nationally.

Co-Lin poured in the runs in the bottom of the first inning against Jones as a pair of errors plated Callie Fortenberry and Marley Poole. Fortenberry reached on a fielder’s choice, while Poole smashed a single to reach base. Two more Jones’ errors loaded the bases for the Lady Wolves with just one out. Ky’Albri Washington capitalized on the opportunity and drove in Amber Brinson with a single up the middle to grow Co-Lin’s lead to 3-0. Delaine McMillan kept the momentum rolling in Co-Lin’s favor with a hard-hit double to left to plate two more runs making it 5-0. The Lady Wolves scored the final run of the explosive frame on yet another Lady Bobcat error stretching the lead to 6-0.

After an uneventful second inning, the Lady Bobcats got one run back in the top of third with back-to-back doubles. Kaytlon Ward retired the next three batters on a pair of lineouts and a groundout to prevent Jones from snatching the momentum from Co-Lin.

The Lady Wolves got the run back in the bottom of the third off a towering solo homer from McMillan. The two-out shot came on the second pitch of her at-bat and cleared the centerfield fence making it 7-1.

Jones got one in the sixth on a fielder’s choice and another two in the top of the seventh on a two-run homer to cut the lead to 7-4, but Mackenzie Gros entered the circle and forced a pop fly before striking out the final batter to keep the Lady Wolves’ season alive.

Ward got the win for Co-Lin in the circle as she went six and a third innings, allowing four runs on ten hits and striking out four, while Gros recorded the final two outs.

McMillan led the Lady Wolves at the plate with two hits in three at-bats and with a team-high three RBIs. Poole, Washington, and Hayman posted one hit each.