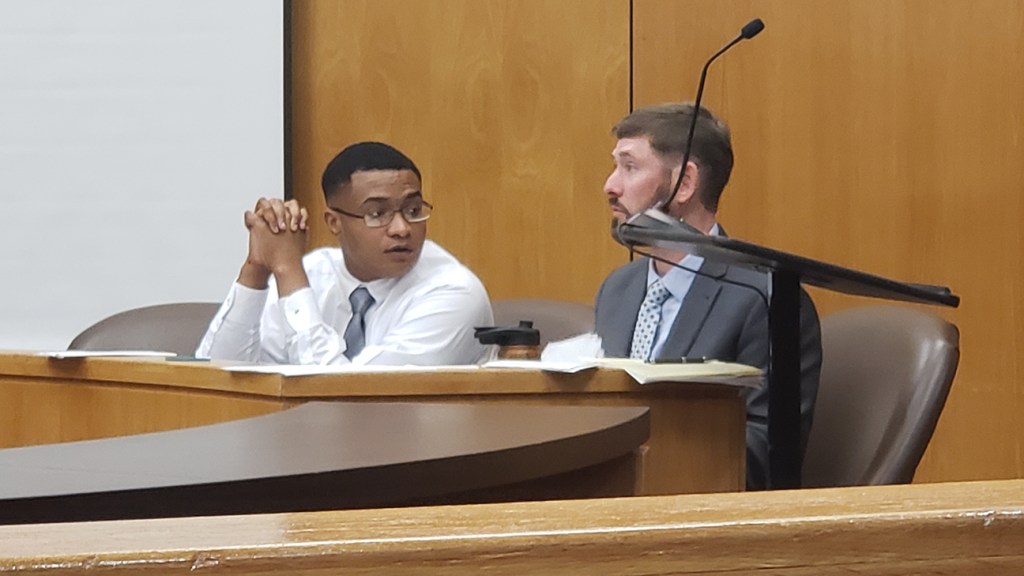 Photo by Donna Campbell Justin Anderson of Natchez, on trial for the 2017 murder of Billy Ray Thomas, talks to his attorney in Lincoln County Circuit Court Tuesday. Pictured are, from left: Anderson and defense attorney Zachary Jex of Natchez.

The murder trial for a Natchez man accused of shooting to death one man in a Brookhaven nightclub in 2017 and injuring another began Tuesday in Lincoln County.

After a jury was seated in early afternoon, Justin Anderson took his place next to his attorney Zachary Jex and the trial got underway in the Lincoln County Circuit Courtroom of Judge Michael Taylor.

Anderson, 24, is charged with first-degree murder in the shooting death of Billy Ray Thomas and aggravated assault in the shooting of Joshua Thomas. Both men were shot as they exited a private party at the Oasis Club on South First Street just after midnight Nov. 24, 2017.

Anderson originally had been indicted with six counts of aggravated assault for the shooting of Joshua Thomas as well as Kentrell E. Tucker, Breanna L. Johnson, Tyquonesha S. Dickey, Samual C. Seals and Sylvester Williams at the Oasis Club, but is only on trial for the murder of Billy Ray Thomas and the assault on Joshua Thomas.

In his opening statement, prosecuting attorney Timothy Jones said the state would prove the “senseless act of violence” against the two Thomas men was carried out by Anderson.

Defense attorney Zachary Jex, speaking after Jones, told the jury there are four reasons his client should be found not guilty at the conclusion of the trial.

“No. 1, the witnesses who will get on the stand are either unreliable or their stories have changed. No. 2, there is no direct physical evidence linking my client, Justin Anderson, to these crimes. No. 3, there is no evidence of premeditation or planning in this case. And No. 4, which is the most important, there were multiple people shooting in the club that night,” he said.

Jex went on to explain the four issues further.

He said of the witnesses who will testify during the trial, only three of them spoke to law enforcement at or near the time of the shooting. Of those three, two said they either didn’t see what happened or “barely saw what happened,” and the third said he saw what happened but it was someone he hadn’t seen before.

“The rest of the witnesses that are going to testify, they didn’t come out of the woodwork until nine, 10 months after the shooting when the district attorney’s office had taken over the case,” he said.

Jex said the state does not have the gun used to shoot Billy and Joshua Thomas.

Jex said the state will try to prove that Anderson is the fatal shooter.

“I’m wondering how they plan to do it without the gun that shot him or the bullets that were used,” he said.

He said the state cannot show evidence of premeditation or a motive for the shooting.

Jones said the evidence during the course of the trial will show that as the club began to empty at midnight, three shots rang out. He said the state will prove Anderson, leaving the club in front of the two Thomas men, turned and pulled a gun from the waistband of his pants and fired three shots. Two of the three struck Billy Ray Thomas and one of those two hit Joshua Thomas in the hand, he said.

Jex said one of the witnesses, Kentrell Tucker, who was also shot at the club, wore a bulletproof vest to the private party.

“When he was asked by Brookhaven Police Department why he wore a bulletproof vest, he said, ‘I already knew what kind of party it was going to be,’” Jex said. “There were multiple people with guns in this club. The question that I’m left with and the question I think you should be really considering yourselves is, ‘Whose bullet hit Billy Thomas? Whose bullet hit Joshua Thomas? I don’t think the State of Mississippi knows.”

Anderson surrendered to Brookhaven police Nov. 29, 2017. He was released on $115,000 bond Oct. 26 with the understanding that he stay away from Lincoln County except for hearings and his trial. Anderson’s initial bond of $1 million was already reduced to $500,000 at his arraignment where he pleaded not guilty to his charges. Anderson, who had no prior felony or misdemeanor charges against him, is living with his mother and aunt in Natchez and traveling with them for the trial.

The trial continues today at 9 a.m. in the upstairs courtroom at the Lincoln County-Brookhaven Government Complex.