Man found not guilty of murder in Oasis Club shooting 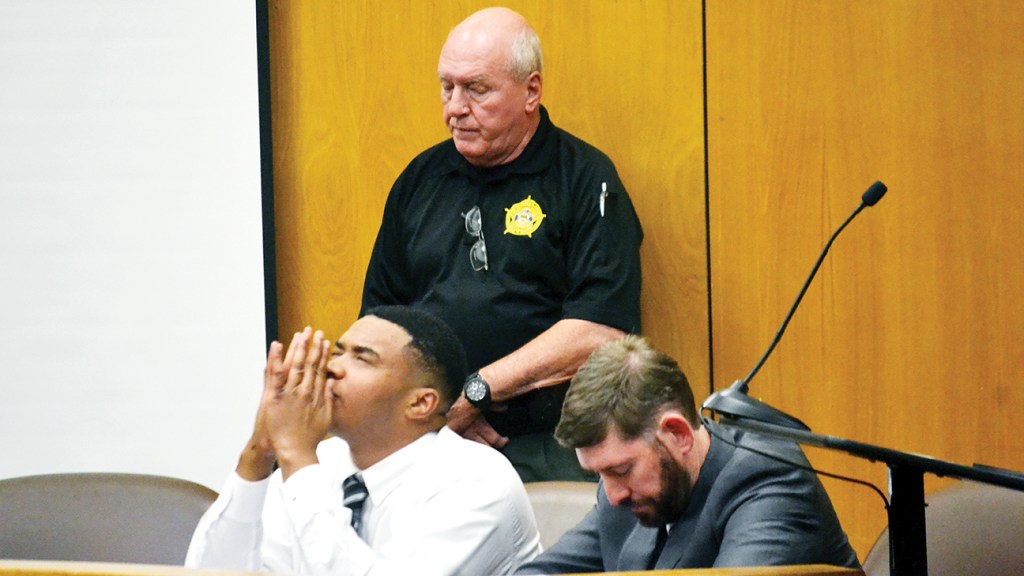 Photo by Donna Campbell A Lincoln County jury Thursday found Justin Devon Anderson of Natchez not guilty of the 2017 murder of Billy Ray Thomas Jr. and the aggravated assault of Joshua Thomas at a private party at the Oasis Club in Brookhaven. Pictured are, from left: Anderson, Lincoln County Jail warden Randy Pickett and defense attorney Zachary Jex.

It took less than an hour of deliberations for a Lincoln County jury to find Justin Devon Anderson not guilty of first-degree murder in the 2017 shooting death of a Brookhaven man at the Oasis Club.

The jury came back on the third day of the trial with a verdict of not guilty after just 40 minutes, determining the state did not prove 24-year-old Anderson, of Natchez, shot and killed Billy Ray Thomas Jr. as the victim left the private party just after midnight Nov. 24, 2017. They also came back with a verdict of not guilty for the aggravated assault charge against Anderson for the alleged shooting of Joshua Thomas, who was standing in front of his cousin as they exited the club on South First Street that night.

Anderson showed no emotion at first as Lincoln County Circuit Clerk Dustin Bairfield read the two verdicts, then as the news sunk in he began to smile, then clasp his hands together in prayer, lifting them to the sky.

Anderson originally had been indicted with six counts of aggravated assault for the shooting of Joshua Thomas as well as Kentrell E. Tucker, Breanna L. Johnson, Tyquonesha S. Dickey, Samual C. Seals and Sylvester Williams at the Oasis Club, but was only on trial for the murder of Billy Ray Thomas and the assault on Joshua Thomas.

“All five of these witnesses differ on what they claim happened,” he said. “None of them can reliably tell you that the shot that they heard hit Billy Thomas.”

During his closing arguments, Jex told the jury the state did not show direct evidence linking his client to Thomas’ death nor did prosecutors show premeditation. He also reminded jurors of the witnesses’ testimony confirming multiple shooters that night.

“What happened was, these witnesses saw an opportunity. Justin’s name got put in this. He’s from out of town and he’s an easy target,” he said. “The other shooters in the club? You better believe they (the witnesses) know who those people are and they don’t want to come forward against them for whatever reason.”

The state also could not produce a gun or the bullets that were used to kill Thomas. Two bullets passed through Thomas but were not found. Other shell casings — .40 caliber and .25 caliber — were found in the club. A pink pistol was found but it was determined it was not fired that night.

Jex said tables were falling, people were running around and it was chaos with shots coming from several directions.

“There were bullets flying everywhere. The fact is, we don’t know what bullets hit Billy Thomas and I promise you, the state does not either,” he said.

“Six people were injured and the state dropped five of those charges. That’s huge, ladies and gentleman,” Jex said. “If that’s the case, then it’s possible that someone else in that club injured those five people. They’re not bringing my client to trial over it. And if someone else injured those people, and after all the evidence you’ve heard, then it’s entirely possible and even probable, that those bullets killed Billy and they injured Joshua Thomas and that gives rise to reasonable doubt.”