County board votes 4-1 to keep administrator 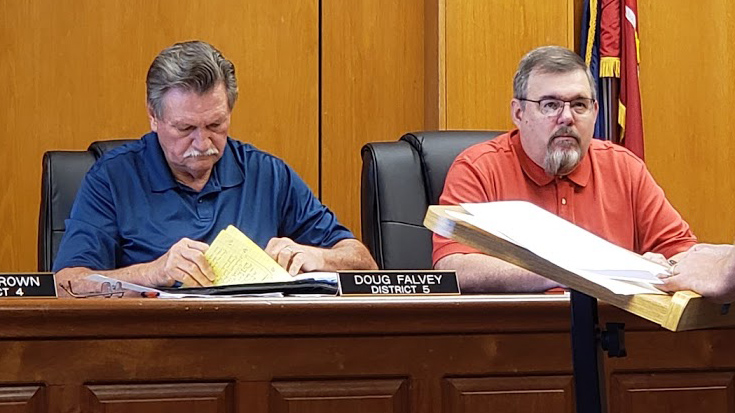 After a closed-door meeting split over two days, Lincoln County supervisors decided not to terminate their board administrator of nearly 22 years.

District 5 Supervisor Doug Falvey was the lone “no” vote to the motion to retain David Fields as county administrator. The motion passed 4-1 Wednesday following a two-hour executive session.

“It’s a business and needs to be run that way, and that’s not happening,” he said.

Falvey said supervisors are not being “fair to the taxpayers of the county” if money isn’t being utilized correctly. He pointed to the money State Auditor Shad White is asking Falvey and three other supervisors to repay.

“This is a prime example,” he said.

Discussion of Fields’ possible termination comes a week after White issued a $165,000 civil demand to Lincoln County Chancery Clerk Tillmon Bishop for failure to reimburse the county for employee salary expenses from his office, according to a press release.

Investigators from the auditor’s office concluded the supervisors voted to pay these salaries, but Bishop failed to reimburse the county for over $125,000 in employee salaries from 2015 to 2018, according to the auditor’s office. This was discovered after a field auditor identified accounting irregularities during an audit of Lincoln County, according to a press release from White’s office May 14. The demand Bishop received is worth $165,813.11 and includes investigative costs and interest.

Bishop has said there is “no money missing” and that it’s an accounting issue.

The four supervisors were also issued demand letters for voting to improperly pay one of Bishop’s employees for performing bookkeeping services for the clerk’s office. Each demand received by the supervisors is worth $5,666 and includes investigative costs and interest.

The board also discussed Fields’ possible termination Monday. On that day, they made an unusual demand, asking their attorney, Bob Allen, Lincoln County Sheriff Steve Rushing and Fields to leave the room while they met.

That meeting was recessed until Wednesday, which allowed them to meet with Pike County Supervisor Chuck Lambert, who is a former comptroller for Pike County.

After talking with Lambert, a motion was made to “retain the services of David Fields,” Allen said.

Even the motion was unusual.

“It was an odd way to do it,” Allen said. “Instead of making a motion to terminate him, a motion was made to retain him.”

Non-elected administrative positions like Fields’ and Allen’s are renewed by the board each January.

Besides Fields’ case, which came under a personnel issue as a reason for the executive session, the board also discussed pending litigation.

“They talked about the auditor’s demand, but no decision was made,” Allen said.

Fields will be starting his 23rd year as county administrator in July.

According to the county’s website, the board’s county administrator should have knowledgeable experience in any of the following fields: work projection, budget planning, accounting, purchasing, cost control or personnel management. The county administrator, under the policies determined by the Board of Supervisors and subject to the board’s general supervision and control, shall administer all county affairs falling under the control of the board and carry out the general policies of the board in conformity with the estimates of the expenditures fixed in the annual budget as adopted by the board.