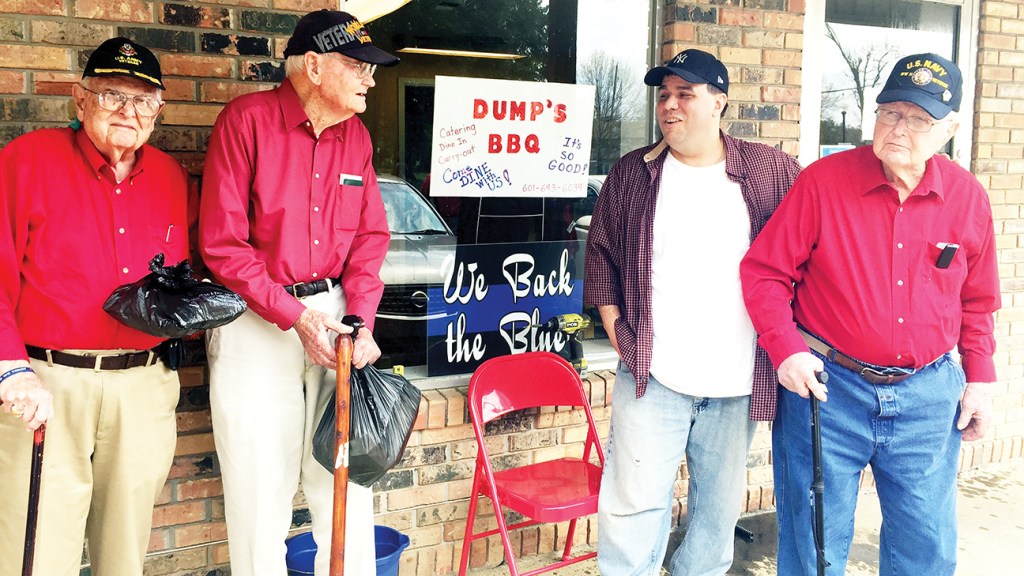 Photo by Kim Henderson Ken Sullivan talks with the Red Shirts outside his restaurant, Dump’s BBQ, in Wesson.

America will remember its fallen service members Monday, but some among us make a point to honor them year-round.

Organized nearly a decade ago, the Greatest Generation Coffee Club gathers to reminisce about their comrades-in-arms on a weekly basis. Its oldest member is 98, the youngest 87. Participant John Paul Smith outlined the qualifications. “Originally it was only for World War II veterans, but now it’s been opened up to some from Korea.”

The group is easy to spot by their red shirts and military caps, whether they’re eating breakfast at Burger King or road tripping to Natchez. Recently, they were on the hunt for barbecue. Wesson restaurant owner Ken Sullivan was happy to oblige.

“Gentlemen, good to have y’all at Dump’s BBQ,” he smiled, shaking their hands enthusiastically. A few of the men came through the door all by themselves. Several used a cane, another a walker. Together, they represented a broad scope of military service — fighter pilot, combat soldier, records clerk.

Once inside, servers escorted the group to a dining area that honors members of the military, law enforcement and first responder teams. There, red chairs wait around white folding tables, and a Semper Fi patch, postcards from World War I and a fireman’s helmet decorate the wall.

Sullivan, a former mortician, explained a large American flag hanging at the rear.

“I managed the body donation program at UMC, and I had a donor who was a veteran. When the VA sent his flag over, he didn’t have any family to claim it. I kept that flag and said, ‘I’m going to put it up somewhere for him some day.’”

As the Red Shirts picked their seats, waitress Nancy Douglas worked her way around tables, taking orders. She was patient, and she smiled a lot.

“No, baked beans and slaw.”

After they asked a blessing, the sweet tea flowed, and the storytelling began. James Swager told the group about a soldier friend he made in Germany.

“A lot of times your life depends on the fellow you’re with as you get into action,” he pointed out. Although that “action” was 75 years ago, the relationship lasted a lifetime. Swager pulled a note from his wallet dated 2009 and read it aloud:

“Jim, enclosed is a gift. I sold my house, and I realized I have a huge profit. What am I going to do with it? Put it in the bank? I don’t need it.”

Someone in the crowd then joked that Swager should tell about the time he took his boots off and waded across the Rhine River. He declined. As they laughed, an admirer came to their table with a request. Darren White had a pictorial history book from 1946 he wanted them to sign.

“We probably wouldn’t be speaking English today, if not for them,” White said. “It would be German or Japanese. Just to still see of them getting around, you know, it’s priceless.”

Gatherings can be hard for the Red Shirts, though. They have to confront loss.

“I think about him on Memorial Day plenty. Sure do,” he said.

“My parents had four boys. The oldest went to field artillery. I went into the Air Force, the one below me went into the Army, and the youngest one went to the infantry. He was in France 13 days when a German machine gunner got him. He lived one month in his 20th year. Four of us went away. Three came back.”

That youngest brother is buried in France. No one in the Rhodes family ever made it to the cemetery, but they have pictures of the grave marker.

“So, they talk about heroes. The ones they shipped back in a pine box or ones didn’t come back, that’s the heroes, you know,” Rhodes said.

After finishing bowls of banana pudding, the Red Shirts wrapped up their meeting.

“I don’t feel comfortable associating with such old men, but I go with them anyway,” Rhodes joked as four of the ringleaders piled into a Chevrolet Impala.

For Navy man Ralph Calcote, 95, it would be the last such gathering. He died May 9. His story includes an interesting twist, though. Following his time of military service, Calcote entered enemy territory — as a missionary.

With the war just ended, Southern Baptists tried to send as quickly as possible 100 missionaries to Japan. Calcote went as number 91. He stayed 35 years and said it was a blessing to be there: “The people loved me, and I loved them.”

Four of Calcote’s children were born in Japan. His daughter and caregiver Nancy Calcote remembered mixed reactions to their family’s presence in the Far East.

“We had an ironing lady who would tell us that the war was our fault. We had another lady who was a nanny, and she just loved us,” she said

Ralph Calcote will be memorialized during a service May 31 at Brookhaven’s First Baptist Church. Just weeks ago, he was at that barbecue lunch, wearing his red shirt and navy suspenders, surrounded by a host of World War II survivors. As the Greatest Generation Coffee Club spoke of those they would remember this Memorial Day, Calcote brought something unique to the table. He quoted John 3:16.