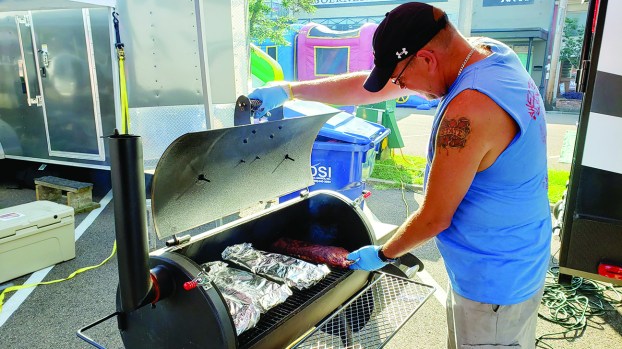 Photo by Donna Campbell Chad Reed with Sheltered Smoke checks on the progress of his ribs Saturday at the Hog Wild BBQ & Family Festival in downtown Brookhaven. Not pictured is Lyn Weaver, who was busy slathering the ribs with his secret sauce before handing them off to Reed to go on the smoker. 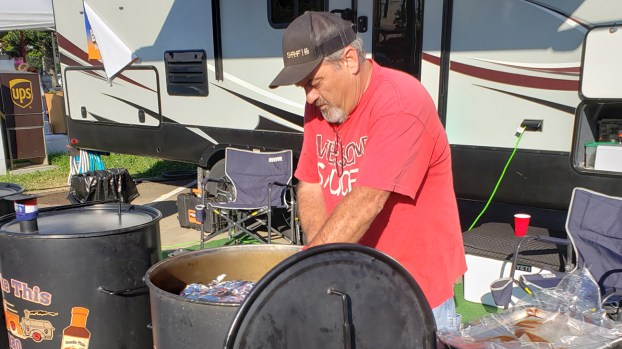 Photo by Donna Campbell Twenty-six teams from several states set up camp in the parking lot next to South Railroad Avenue, including Smoke This BBQ of Clark, Missouri.

Though a lot of the competitors of the ninth annual Hog Wild BBQ & Family Festival left Brookhaven bone tired, organizers believe they’ll be back to Lincoln County next year to do it all over again.

Twenty-six teams from several states set up camp in the parking lot next to South Railroad Avenue Friday morning, preparing for an all-night smoking session to hopefully win over the judges who would be tasting ribs, chicken, pork and brisket. A few competitors even tried their hands at steak and some of the younger participants grilled burgers.

“As far as the event itself, I think everything went great,” said Lincoln County firefighter Adam Wallace, who co-chairs the event with Mark Porter. “We didn’t have any trouble, no problems with anything. Everybody’s happy to be in Brookhaven like they always are.”

The annual festival and competition raises money for volunteer fire departments in Lincoln County and this year donated 25 percent of the proceeds to TEAAM Autism, a Mississippi-based organization located about an hour from Brookhaven.

“There’s not many places that do something like that, that is close to home,” he said.

The ribs, chicken, brisket and pork competition is sanctioned by the Kansas City Barbecue Society. The grand champion chosen Saturday was Grills of Mississippi of Ridgeland and the reserve champion was Texas-Car-B-Que of Carrolton, Texas. Third place in the master series went to Smoke This BBQ of Clark, Missouri.

While teams were too busy competing to offer food for sale, the Lincoln County Volunteer Firefighters had plenty of ribeye steaks and pulled pork plates for every size appetite, Wallace said. Several other vendors were also set up with festival favorites like chicken-on-a-stick and corn dogs.

For the complete list of scores, visit www.kcbs.us and search for event scores for Hog Wild BBQ.