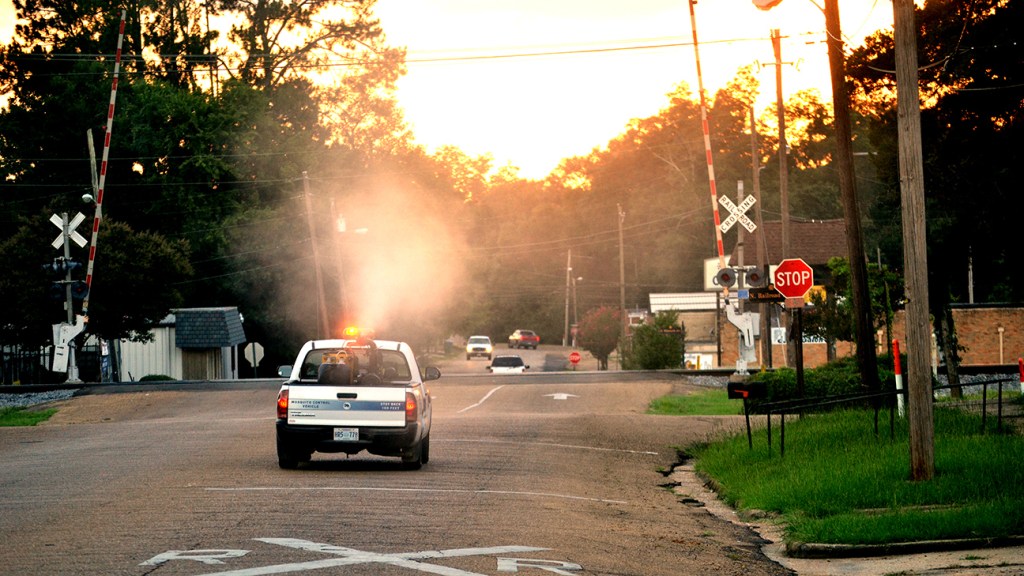 Photo by Brett Campbell A Vector DIsease Control truck sprays for mosquitoes near downtown Brookhaven during the 2018 spraying season.

Mosquito-spraying season is in full swing.

Larval surveillance is conducted to get rid of the mosquito problem before it starts, while adult mosquito surveillance helps crews determine what chemicals to use when spraying.

“If we can kill them then, then they can’t become adults,” said Brandon Cobb, the contract supervisor for Vector Disease Control, which covers Brookhaven and Hinds and Rankin counties.

The number of mosquito species seen in Brookhaven can change throughout the year, especially during the summer, Cobb said. Crew members can expect to see five to 15 species during the summer months.

This is Vector’s third season to spray in Brookhaven. Its contract was renewed in January.

To cut down on mosquitoes, Cobb encourages dumping water out of anything that shouldn’t be holding it. Objects meant to hold water should be dumped and refilled once a week, and greenery should be trimmed, as mosquitoes often hide out in the shade.

“Anything that can hold even the smallest amount of water can become stagnant and mosquitoes can breed in it,” Cobb said.

The city is divided into five zones. Every Monday and Wednesday, a different type of trap is set in each zone.

Samples from the traps are sent off to the Department of Health for testing. If the traps test positive for diseases, crews focus on that particular area to cut down on the problem.

Crews spray once a week, and zones are sprayed any time from 7 p.m. to midnight. If mosquito counts get too high in a certain zone, crews will spray that area again.

Cobb says their trucks are far quieter than past trucks. Combining that with the evening spray times, many residents may not be aware their street is being sprayed at all.

“If citizens are in bed, they’re not going to hear the truck,” Cobb said.

The trucks used by Vector are equipped with GPS systems, which track which streets the trucks have sprayed and the ones they still need to spray.

“We’re all trying to protect the public health,” Cobb said.