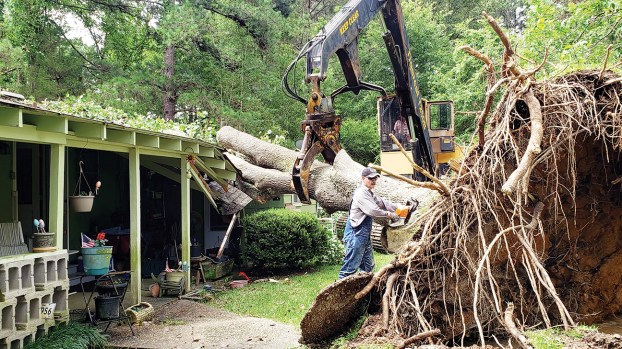 Photo by Donna Campbell Tim Smith cuts through the trunk of a 75-year-old poplar that fell on a house in Zetus Thursday morning.

Marie Delatte woke with a start Thursday morning and noticed her ceiling fan wobbling — but not the tree poking through her roof.

Not at first, anyway.

At 4:50 a.m., Delatte had slept for only two hours — thanks to a good book that kept her up late. She wasn’t focusing on the bigger picture.

Her concern for her shaky ceiling fan gave way to shock and dismay when she noticed a gaping hole in her bedroom ceiling and a branch from her poplar tree poking through the roof.

The roof on the house at 488 Quitman Lane in the Zetus community was one of several casualties of a small storm that came through Thursday morning. Lincoln County Emergency Management Director Clifford Galey said several trees were reported down in the city and county Thursday morning. Delatte’s house is the only structure hit and no injuries were reported, he said.

Though the tree broke through the roof, the structure remained intact for the most part, though she could see sky through her ceiling once the tree was removed. Her porch roof took most of the tree’s weight and collapsed.

Bill Smith balanced on the roof  and used a chainsaw to remove the limbs and cut the trunk into sections to be moved by a big yellow Tigercat log loader.

It took just a moment for the tree to fall, but about an hour to move it out of the way.

Smith said the showers over the past few days saturated Delatte’s yard, which is dotted with trees around her house.

The poplar that fell was about 70 feet tall and had been standing in that spot for about 75 years. Delatte had enjoyed it for the last five since she moved there.

Smith said it was the tree’s time.

“Lot of straight-line winds that just suddenly came through, and the ground is saturated, that tree has had just about all it wanted to take, ’cause it’s an old tree,” he said.