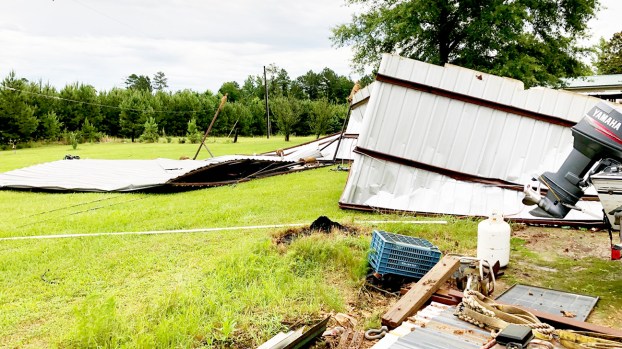 Photo submitted A shed on McCurley Lane belonging to Kirk Douglas was damaged by wind late Sunday night. No other structural damage was reported.

“I know all three power companies are working to get power back up,” Emergency Management Director Clifford Galey said.

Southwest Electric reported 16,000 outages spread across nine counties. Only 3,180 remained without power as of Monday evening. The company has around 25,000 meters.

According to McGee, outages may continue for the next two to three days due to crews discovering broken trees and poles.

Southwest Electric has six outside crews assisting in repairs and restoration of service. Two from MDR Power Line Construction, two from Pearl River Valley Electric out of Columbus and two from East Mississippi Electric out of Meridian.

Outages were first reported to Southwest Electric around 3:30 a.m. Monday. Crews were sent out shortly after.

“We are committed to restoring power as quick and safely as possible,” McGee said.

Magnolia Electric Power only had around 150 outages in Lincoln County as of early Monday morning. These numbers dropped as the day progressed. As of 4 p.m. Monday, only 39 meters were left without power.

“We didn’t have that many outages,” Member Services Director Lucy Shell said.

“Our linemen have been out working since four this morning and they have continued to work,” Shell said.

Southwest did have some damage to their poles in Lincoln County. A pole on Hwy. 51 near Bogue Chitto was damaged.

A shed on McCurley Lane belonging to Kirk Douglas was hit by the storm late Sunday night, Galey said. No other structural damage has been reported.

The Daily Leader brought home multiple awards — including seven first-place plaques — from the annual convention of the Mississippi... read more