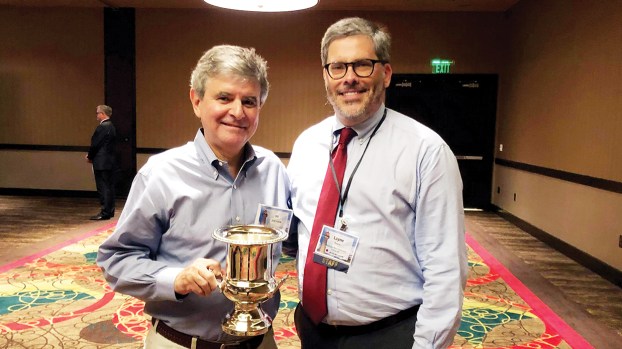 A longtime journalist and publisher was lauded by his peers recently for his work fighting newsprint tariffs that threatened the newspaper industry.

“It was a surprise,” Jacobs said. “Delighted, but unexpected.”

Jacobs, a past president of the MPA,  was walking out the door of the meeting room at the Golden Nugget to check out of the hotel, but stopped to speak to someone. He heard someone being introduced on stage, but thought it was a speaker. Then he recognized his name and humbly headed to the stage to accept the award and the recognition that came with it.

“Bill’s work in 2018 to help rally support against tariffs on Canadian-imported newsprint resulted in some of our congressional delegation signing on to an effort to have them repealed,” Bruce said. “Bill’s involvement helped secure the help of Sen. Roger Wicker, who testified before the International Trade Commission on the harm the tariffs would cause.”

Bruce said the President’s Award is given at the discretion of the board leader to an MPA member or volunteer who has done exemplary work to benefit the industry and further the Association’s program of work.

“MPA Immediate Past President Paul Keane, publisher of The Wayne County News, chose Bill for this reason,” he said.

Jacobs got involved in trying to stop the tariff two years ago when a newsprint company in Washington began using imported paper to save money. This led to tariffs placed on newsprint.

This impacted newspapers dramatically, as less newsprint was being purchased within the United States. Newsprint companies began raising prices 10 and 20 percent.

Publishers nationwide wanted to lift the tariffs because American newspapers were suffering. With rising prices for nationally sourced newsprint, newspapers would have to make cuts. This would eventually lead to people losing their jobs.

“They wanted to get all the support they could to kill this tariff,” Jacobs said.

With Jacobs’ help, tariffs were reversed in 2018.

“I took their lead and headed up the effort in Mississippi, so they were thanking me for that,” Jacobs said.

Jacobs has been involved in the newspaper business for much of his life. His parents bought The Daily Leader, formerly known as The Leader-Times, in 1958 after moving to Brookhaven from Florida. He graduated from the University of Mississippi in 1977 with a Bachelor of Science in business and journalism.

Jacobs said the most important thing he’s learned working in journalism is listening to and working with the public.

“How we can all work together is how we can make things happen,” Jacobs said. “I think the job of a community newspaper is to find ways to get the community to work together.”

The Brookhaven School District has approved the budget for the 2019-2020 school year. The last meeting was held for the... read more