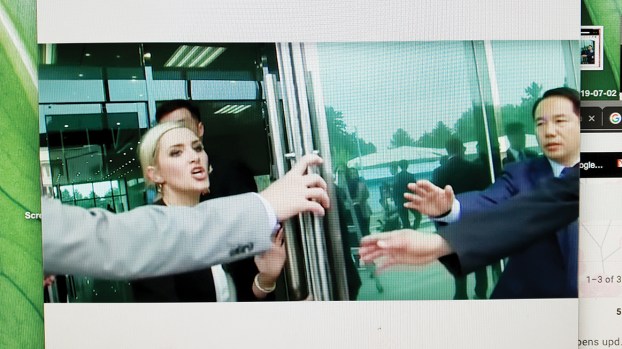 Laura Lee Lewis is pictured in this screen grab of a video taken of the U.S. media pool forcing their way into the building where Trump and Kim Jong Un met.

“The world is watching and it’s very important for the world.”

That’s what President Donald Trump said as he met with North Korean leader Kim Jong Un Sunday at a sit-down meeting after Trump’s historic steps over the concrete slab that divides the two Koreas.

And Brookhaven’s own Laura Lee Lewis was there to witness history.

A video of the White House press corps uploaded onto YouTube by The Washington Post shows newly-appointed press secretary Stephanie Grisham pushing against North Korean security to make way for the US media pool. What’s most interesting — at least to those who remember the Brookhaven teenager who would eventually become Miss Mississippi — is the first few seconds when Lewis pushes her way through the glass doors of the Inter-Korean House of Freedom, yelling “US pool! US pool” as she leads the brigade of American press past North Korean guards with assistance from the Secret Service.

The jaunt through the glass doors to the meeting room where Trump and Kim sat together is no more than 90 seconds, but it’s like a scene from a Jason Bourne spy thriller.

Grisham, who reportedly was bruised in the scuffle with security, makes an opening for the US group to gain access into the meeting room, which is already filled with North Korean camera operators and reporters.

For Lewis, who was also fourth runner-up to Miss America, it’s just one of several national and international adventures she’s had in the past year since joining the staff of the White House.

She’s listed as lead press advance representative on the White House’s annual report to Congress as of June 28.

Those closest to Lewis — family and tight-lipped friends — are not allowed to talk about her career, although Lewis herself regularly posts photos of her travels with the press corps on her Instagram account.

She posted several under the heading “Gyeongbokgung Palace” this past weekend, including some of Trump and Kim’s encounter in the divided border village of Panmunjom as well as the president taking those famous steps across the line.

According to other posts, she was at Buckingham Palace three weeks ago. Before that she’s on the White House lawn at the Easter Egg roll next to first lady Melania Trump. Her parents, Mark and Lorin Lewis, flew in for that event.

Her dad also showed up as her “Plus One” at the White House Christmas party.

“We’re so proud of Laura Lee,” Cox said. “She’s always been an overachiever. We’re enjoying keeping up with her career. She’s a go-getter.”

“The nation underestimates the type of people that come from Mississippi,” he said. “Laura Lee Lewis is a small town Mississippi high school graduate who went to college, became a Miss Mississippi and has pursued her career far beyond the realms of the typical stereotypes that are thought of people from here. She is witnessing a historical world event first hand and is involved in reporting the day-to-day operations of President Trump while visiting with North Korea’s Kim Jung Un. That’s an impressive hometown story, in my opinion.”

Absentee voting will continue until Aug. 3