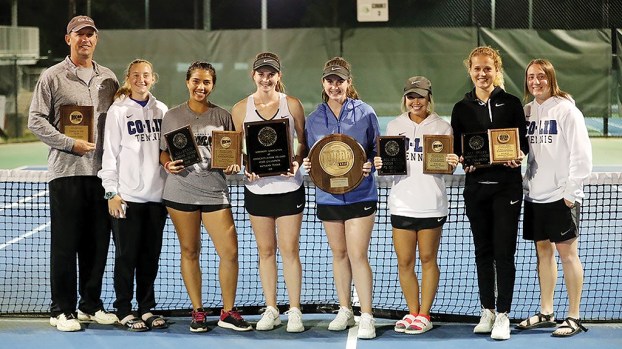 The Copiah-Lincoln Community College Lady Wolves tennis team collected another feather in their cap. The Lady Wolves were recognized as the National Junior College Athletic Association’s Academic Team of the Year in women’s tennis with the top overall team grade point average 3.79.

“This recognition puts the final touches on a Cinderella season for this team,” said Co-Lin Athletic Director Bryan Nobile. “Winning the MACJC State/NJCAA Region 23 Championship, competing in the NJCAA National Tournament, and the winning the NJCAA Academic Team of the Year is the icing on the cake for these young ladies. I’m proud of this team and Coach Rob Channell.”

The Lady Wolves tennis team had an outstanding season winning the NJCAA Region 23 and the Mississippi Association of Community and Junior College’s (MACJC) State Tennis Championships. They finished 14th out of 31 teams at the NJCAA National Tennis Tournament in Tyler, Texas. They were the top Mississippi team in the tournament ahead of Meridian, Jones and Mississippi Gulf Coast.

“I’m so very proud of our team,” said Lady Wolves Head Coach Rob Channell. “They excelled on the court and in the classroom. This amazing group of young women will be successful wherever they go after Co-Lin.”

Members of the team are Kara and Katy Clark, and Ashlyn Locke, all of Brookhaven; Paula Coronado of Bogata, Columbia; Madison and McKenzie Shows, both of Mendenhall; and Carmen Manicea of Castellon de la Polana, Spain.

The Brookhaven Soccer Association had a successful Spring season as they sent multiple teams to the state tournament levels of... read more