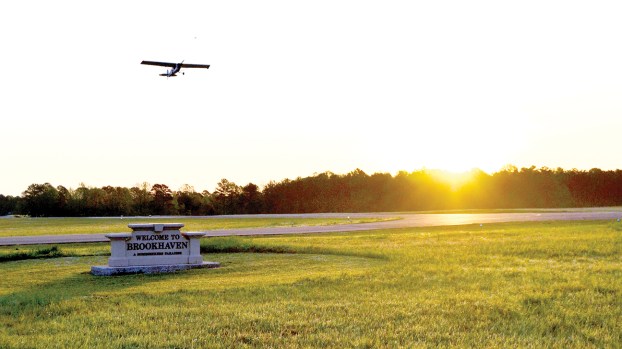 Photo by Donna Campbell A small plane takes off from the Brookhaven-Lincoln County Airport in the early morning light.

Brookhaven airport plan is ‘coming together’

The city is taking bids through July for a taxiway extension project at the Brookhaven-Lincoln County Airport, which will be funded from a $190,000 Federal Aviation Grant.

The taxiway is part of a 20-year, $12 million airport improvement plan the city embarked on in February.

The grant, announced this week by U.S. Senators Roger Wicker and Cindy Hyde-Smith, both Republicans from Mississippi, is part of $13.39 million for improvements to seven airports in the state.

The U.S. Department of Transportation is awarding the Federal Aviation Administration grants.

“This third round of FAA grants will go a long way toward improving air service and safety at these Mississippi airports,” Wicker said.  “Strong airports make our state a more attractive place for businesses, tourists and travelers.”

However, Brookhaven’s airport managed to get a share to extend Taxiway B to 687 feet to meet operational needs of the airport.

“I’m pleased these grants will also benefit other regional and local airports around Mississippi,” said Hyde-Smith, of Brookhaven.

On June 6, Wicker and Hyde-Smith announced the first round of FAA awards worth $5.68 million for improvements to 12 airports.  A second round of grants issued late last month totaled $4.81 million for work at 18 additional airports.

Besides the Jackson airports and Brookhaven, the third round of FAA grants will support projects in Corinth, Columbus, Louisville, Hattiesburg and Moselle.

Other projects planned at the Brookhaven airport include construction of new hangars with City of Brookhaven and grant funds, demolition of obsolete hangars and the relocation of the airport’s fuel farm after demolition of hangars.

All four projects will be complete within the next 12 months, said engineer Ryan Holmes with Dungan Engineering.  The projects total approximately $1.23 million with $554,096 in grants.

“Viable airports require regular maintenance and upgrades, particularly those serving rural communities,” Hyde-Smith said after the first round of grants were announced. “This first series of FAA grants support those efforts at Mississippi airports. They will be used to improve safety and to help draw industry and economic development to these communities.”

In February, the Brookhaven Board of Aldermen voted to approve a $12 million capital improvement plan at the Brookhaven-Lincoln County Airport that will cover additions and renovations over the next two decades. They voted to borrow the $600,000 on a five-year note to begin design and bidding on a strip hangar.

The airport, constructed in 1967, includes a 5,000-foot asphalt runway that is 75 feet wide. The airport sees 9,500 operations annually. Each landing and takeoff counts as an operation.

The 20-year plan is designed to take what’s there and either relocate it or replace it to allow for optimum use of the property and facilities. The plan calls for a new strip hangar to be built to replace the older hangars made of block and sheet metal. And with the old hangars gone, the fuel farm can be moved.

“It’s what we’ve been working toward,” Mayor Joe Cox said about the grant. “It’s all part of our master plan for the airport. It’s coming together.”

Though his stepdad wore a lawman’s badge, Robbie Thibodeaux found another way to serve his community. Thibodeaux hung up his... read more