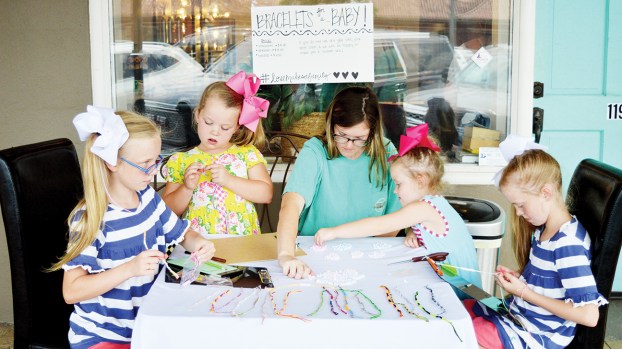 Four sisters are selling handmade bracelets to raise money for a baby.

The Tate family plans to adopt a baby to add to their family, which will make them a party of seven. One way they’re raising the money is by selling handmade bracelets the children are making.

“We have been thinking about and praying about adopting a baby,” mom Sidney Tate said.

The girls wanted to get involved in the adoption process by doing something hands-on to raise money.

They made their first bracelet for their dad, and it’s grown from there. Now they’re making bracelets for anyone who wants to buy one.

Tate, 35, is a mother to four girls. Susanna and Mary Anson, 11, are the oldest and are fraternal twins. Next is Eleanor, 7, and then Evelyn, 4. All are students at Brookhaven Academy.

The Tates already have a big family — with four babies in six years, their brood grew quickly.

“We actually wanted to adopt before we had any kids,” Tate said.

About a year ago, the Tates began thinking about adoption, and they began discussing it amongst themselves this summer.

The girls have a goal — to raise $2,000 so the family can begin the matching process for their domestic adoption.

“They came up with this all on their own,” Tate said.

One day the girls hope to tell their new sibling how they worked together to raise money to get him or her here.

Tate says she’ll be happy with either a girl or boy.

“We’ll take whatever the Lord gives us,” she said. “We will have a lot of adjusting to do if it’s a boy. Dad says he can take another male around the house.”

The family plans to go through Faithful Adoption Consultants, an agency based in Georgia that chooses adoption over abortion.

The four girls are over the moon to have a new sibling in their family. They’re all excited for different reasons.

“I’m excited. I have to be very responsible when the baby gets here,” Susanna said.

The younger siblings are more excited, and are ready to spend their days with a new playmate.

“Having a baby to play with, because we don’t have anyone little,” Mary Anson said.

“I’m excited because I want to play with it,” Eleanor said.

Allison Hudson has been helping her nieces with their endeavor and sees it as something positive for them.

“I think these girls have the biggest hearts,” Hudson said. “It definitely shows the kind of hearts they have, they wanted to help in such a big way when they found out.”

Adoption isn’t a foreign concept in the Tate family. Sydney’s sister adopted a 2-year-old boy from China in 2016.

Most of their orders have been from friends and family, but now they’re expanding out to the community.

The girls have been sitting at a table outside Sidney’s Salon on South Railroad Avenue for the past couple of days, but they’ve been selling bracelets for two weeks now. They’ve raised $1,000 so far.

The sign above their table reads “Bracelets for a Baby!” — with the hashtag Lovemakesafamily.

Hospital to teach how-tos of babysitting

A class to learn the ins and outs of babysitting is returning to the hospital this month. The Safe Sitter’s... read more