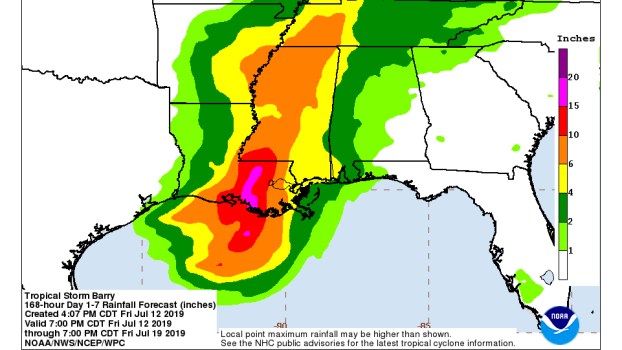 Brookhaven aldermen and Lincoln County supervisors Friday declared emergencies in the city and county to prepare for a worst-case scenario if Tropical Storm Barry’s winds and rains cause flooding and property damage in Southwest Mississippi today.

“We’re looking at Saturday through Sunday night some 7- to 10-inch rainfall amounts, maybe as much as 15 in some places,” he said.

Forecasters said slow-moving Barry could unload 10 to 20 inches of rain through Sunday across a swath of Louisiana that includes New Orleans and Baton Rouge, as well as southwestern Mississippi, with pockets in Louisiana getting 25 inches.

The U.S. National Hurricane Center said Tropical Storm Berry is strengthening as it approaches the Louisiana coast and is expected to become a hurricane when its center reaches land.

The storm’s center is expected to come ashore today.

“It’s moving really slow and that water in that Gulf is hot,” Galey said.

Barry was expected to arrive as a weak hurricane, just barely over the 74 mph wind speed threshold, between Morgan City and New Orleans.

“It will probably be just west of the Mississippi River when it comes up to see us,” he said.

Galey suggested finding a safer spot to ride out the rains if you’re in a location known to flood.

“If you’re in an area that typically floods in heavy rains, find an alternative place to stay,” he said.

Officials can open the Brookhaven Building as a shelter if needed, but they have not made that decision yet. Brookstock XIX has concerts planned there tonight as part of the three-day music festival.

The Mississippi River is expected to crest today at about 19 feet in New Orleans, where the levees protecting the city range from about 20 to 25 feet in height. That could leave only a small margin of safety in some places, particularly if the storm were to change direction or intensity.

Late Friday afternoon, Barry was about 70 miles southeast of Morgan City, with winds of 65 mph. Tracking forecasts showed the storm moving toward Chicago, swelling the Mississippi River basin with water that must eventually flow south again.

Brookhaven aldermen and Lincoln County supervisors this morning declared emergencies in the city and county to prepare for a worst-case... read more