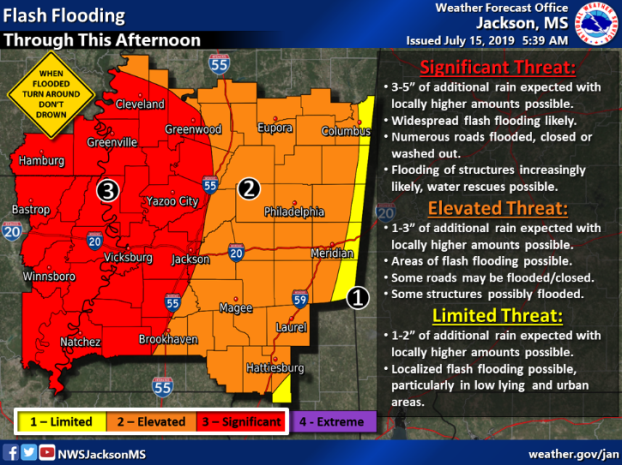 Barry will continue to dump rain on Southwest Mississippi today, with another 3-5 inches possible in parts of Lincoln County.

The storm already dumped up to 3 inches in the area. The additional rainfall could cause flash flooding.

The National Weather Service has placed the western part of the county under a “significant threat” of flooding today.

Barry did not unleash the kind of rainfall that forecasters expected. Lincoln County was expected to get up to 15 inches when the storm arrived Saturday.

In Mississippi, the most rain fell in Jasper and Jones counties, where 8 inches was recorded. Up to 14 inches of rain has fallen in parts of Louisiana.

New Orleans Mayor LaToya Cantrell said Sunday the city was “beyond lucky” that rainfall there fell well short of early predictions of a deluge that could overwhelm the city’s pumping systems.

“We were spared,” she said at a news conference, while noting the city was ready to help nearby parishes hit harder.
About 51,000 customers in Louisiana, 1,800 customers in Mississippi and another 1,700 customers in Arkansas were without power Sunday night, according to poweroutage.us.

Bands rock The Haven at Brookstock Too

Brookhaven-based band 4 Way Stop took the stage Friday night as part of Brookstock Too at The Haven. The concert... read more