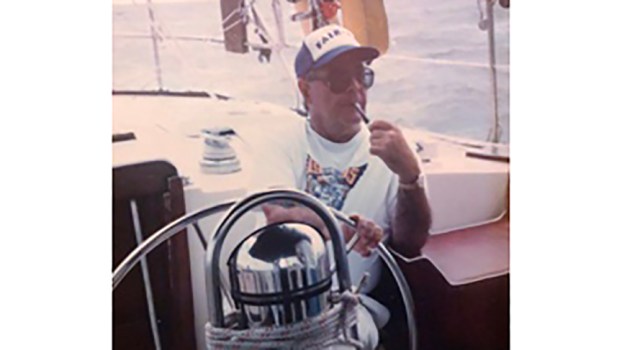 Bob was born in Chicago, Illinois, on March 11, 1932. After his father died when he was very young, the family moved to southern California. He was fortunate to have been enrolled and graduated in the class of 1949 from the Army & Navy Academy in Carlsbad, California.  After graduation, Bob attended the University of California, Berkeley where he earned an associate degree in physics. While at Berkeley, the Southern California Congressional representative offered Bob a nomination to attend the United States Naval Academy. He graduated in June, 1955 as an ensign, U.S. Navy, a member of 16th Company. Upon graduation, Bob served on a destroyer and later volunteered for submarine service that ultimately resulted in his selection into the Navy nuclear power program. Twelve of his 25 years were spent at sea on his beloved fast attack and ballistic missile submarines. While serving in the Navy, he earned his master’s degree in education from George Washington University. After retiring from the Navy, Bob accepted a position as an instructor in the nuclear training program at Virginia Electric and Power Company in Surry, Virginia, from which he retired in 1990. Bob loved to teach and he continued to do so in the Norfolk and Virginia Beach school systems.

Bob met his beautiful wife Mary (nee Fogarty) in 1957 during the Battle of the Coral Sea festival in Brisbane, Australia, while serving aboard the USS Charr (SS 328). They were married in 1958 and raised three children. Bob was an avid sailor. He enjoyed sailing Fair Go, his 44-foot sailboat, throughout the Caribbean and western Atlantic. In 1992, he embarked for Spain to celebrate the 500th anniversary of Columbus’ voyage. Unfortunately, Hurricane Andrew caused severe damage to his boat forcing him return to Norfolk. In 2005, Bob and Mary moved to Mississippi to a beautiful home in Roses Bluff on the Ross Barnett Reservoir to be close to his daughter and her family. His loving wife passed after 49 years of marriage and he moved to St. Catherine’s Village where he had been a resident for eight years. Bob was a faithful parishioner at the Cathedral of St. Peter and an active member in the Knights of Columbus Council #848.

Bob will forever be remembered as a devoted husband, father, teacher and consummate sailor. Bob loved the opera and was a regular at the Mississippi Opera and the major opera houses of the U.S.

He is survived by his children, Robert Miller Jr. CDR, MC, USN(ret) and his wife Lisa Thearle-Miller, DeeDee Renstrom-McMcullar and her husband Curtis, and Susan Ross and her husband Jeff; and his grandchildren, Dustin Farrell, Max Miller, Robert Scott Renstrom and Andrew Renstrom.

The funeral Mass will be celebrated at the Cathedral of St. Peter, 123 N. West St., Jackson, Mississippi, at 10 am. July 16, 2019. Fr. Nick Adam will be the celebrant. Interment will follow at Lakewood Memorial Park. Sebrell Funeral Home in Ridgeland is handling arrangements.

Memorial donations in lieu of flowers should be made to Catholic Charities, Diocese of Jackson.