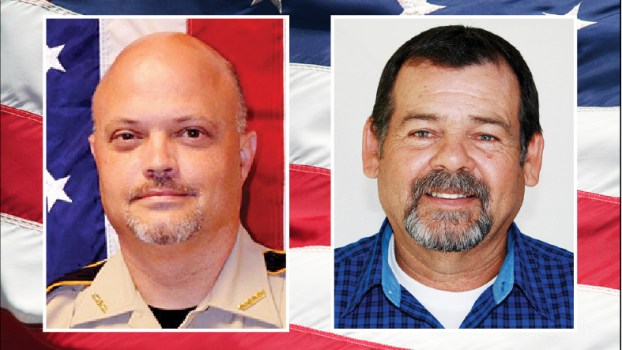 The incumbent sheriff hopes to remain the top lawman in the county while a retired state trooper wants to unseat him in the primary election Aug. 6.

Lincoln County Sheriff Steve Rushing and John Wayne Leggett have nearly half a century of law enforcement experience between them. Both want to be the sheriff of Lincoln County for the next four years. It’s a race that will be decided in the primaries Aug. 6 since the two Republican candidates are the only two names on the ballot.

Leggett and Rushing — listed below in alphabetical order — emailed their responses to four questions.

Working within the given budget, how can you expand the scope of drug investigations as well as drug education programs in schools and the community?

First, I will invite any agency willing to work with Lincoln County to help with their areas of expertise, such as narcotics, investigations and Special Victims Units. Networking and creating liaisons with neighboring agencies will not cost our county any additional salaries. Also, I will check with other agencies and departments to find out what tactics and techniques have been successful for them in the past. With this information, I can build a model for Lincoln County that will be more time and cost efficient. I will seek advanced training for officers, and government grants for development and improvement of the DARE program and others like it, to be implemented in schools and other interested groups.

What is the most significant crime issue in Lincoln County and what will you do about it?

I believe the out-of-control use and abuse of illegal drugs is the biggest issue facing Lincoln County currently, like much of the rest of the state. Drug dependency and abuse often leads to other crimes such as burglary, assault and other immoral acts. I will lead the department in taking a proactive approach to resolving this problem by first earning the trust and respect of our citizens. This will allow them to feel more comfortable and confident in reporting information they know, which may aid in investigations. I believe the illegal drug trade is responsible for most of our county’s violent crime. We will focus on the areas of violations, develop cases on them and stick with it until it leads to arrests and convictions.

What do you believe is the greatest challenge you will face if elected as sheriff and how do you plan to tackle it?

The sheriff is responsible for overseeing all aspects of the agency, but I believe the jail will be the biggest challenge of them all. There are a lot of rules and regulations to keep in check, and because most inmates are not happy about being there, they may present more of a challenge in keeping the jail running smoothly. I will insist that jailers receive the latest training on operation, control and especially safety. We will have to implement creative, observant and consistent strategies to closely monitor who and what is coming in and out of our facility.

Based on the budget you have and the number of inmates coming in per year, what’s your plan to reduce the cost of running the jail?

Because I am not currently employed by the Lincoln County Sheriff’s Office, I do not have access to budget information or inmate accounts. However, when elected sheriff, this will be some of the first information I will seek to find out. I will check the budget to look for places to cut back without affecting the safety of the inmates or staff. I will look at food service and medical care contracts, inmate work programs and state/federal aid programs as areas of possible change to make funds stretch as far as possible and still remain most effective for all involved.

Experience for Lincoln County sheriff: I have 23 years of law enforcement experience with the sheriff’s office, serving the last 12 years as sheriff of Lincoln County. I began in the sheriff’s office as a patrol deputy, moved up to a criminal investigator and was captain of the investigations division when I was appointed as sheriff in 2006. I graduated from the University of Southern Mississippi with a degree in criminal justice, the FBI MS Command college and the National Sheriffs’ Institute where I received executive level training in law enforcement.

Working within the given budget, how can you expand the scope of drug investigations as well as drug education programs in schools and the community?

While we work with other agencies to combat the drugs in our county, we have our own deputies assigned as drug investigators within the department that are focused on fighting the drugs inside our county. They receive the training and have the necessary equipment to make the cases needed to get the drug dealers off our streets.

Drug prevention is a key concept that I have promoted since I have been in office.  We do this by teaching the DARE program in our schools. This program is a great asset in that its main focus is teaching our children the dangers of drugs at an early age. We also offer drug education classes through our Neighborhood Watch programs and by offering classes to our local churches and other groups that teach the dangers of drugs. I believe that working together we can proactively teach our kids about the dangers of drugs while at the same time work together to get the drugs off our streets.

What is the most significant crime issue in Lincoln County and what will you do about it?

Property crimes and drug crimes have always been the main issues we face on a daily basis. I believe that providing deputies with the equipment and training to do their jobs effectively will continue to help combat these issues. At the same time, our investigators receive the necessary training to pursue the cases in our court system to put the criminals in jail that commit these crimes. Finally, we will continue building strong working relationships with our citizens to proactively fight these crimes through our Neighborhood Watch programs.

What do you believe is the greatest challenge you will face if elected as sheriff and how do you plan to tackle it?

The greatest challenge of being sheriff is handling the multitude of varied issues the sheriff faces on a daily basis. The sheriff is responsible for providing deputies to serve and protect the citizens, oversee almost 50 employees, manage an approximate $3 million budget, provide security for the court system, build relationships with the community members and oversee a jail that houses 85 to 90 inmates per day. I have learned through my experience as sheriff that it is imperative to stay current on the many laws dealing with these issues, as well as having the staff that is trained to assist in all areas.

Based on the budget you have and the number of inmates coming in per year, what’s your plan to reduce the cost of running the jail?

Currently our jail is a state certified facility that houses city, county, and state inmates. Since becoming sheriff, I have seen the average daily inmate population grow from approximately 75 to 85 per day. Twelve years ago, we began working on several ways to keep inmate cost to a minimum, which is a continual work in progress.  We have a nurse and doctor who come in and evaluate the medical complaints of inmates, a contracted food service vendor to keep meal costs down, and we have developed a working relationship with the judges to ensure inmates’ cases are addressed in a timely manner. We continue to enhance our program where inmates work in areas that help with building maintenance, vehicle repairs, and litter pick up in the county. I am always looking for other cost saving methods by sharing information/ideas with other sheriffs across the country and researching areas that will help save money, while at the same time provide for a secure jail.

According to the website, golincolnms.com, the sheriff is elected at-large and serves a four-year term. The sheriff’s law enforcement duties include keeping peace within the county. Administrative duties include serving as the county’s jailor, submitting a budget of his office to the Board of Supervisors, keeping Mississippi Department Reports and keeping a jail docket.

People may vote absentee for several reasons, including if they will be out of town on election day, if they are temporarily or permanently disabled or if they are 65 or older, Bairfield said.

Brookhaven’s Riley Whittington may already be a distinguished young woman, but she wants to be called one officially. The daughter... read more