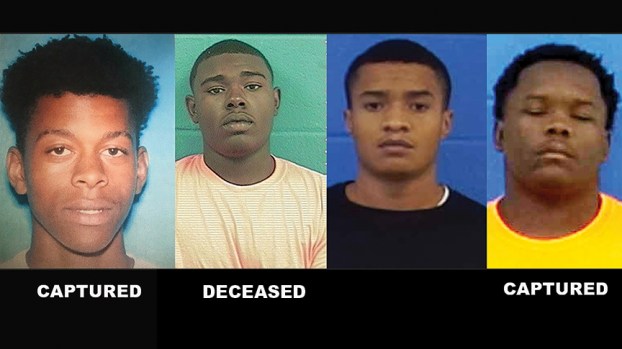 One of four suspects in Brookhaven murder killed in shootout; last suspect turns himself in

Update: Justin Anderson turned himself in to authorities in Natchez Monday night in connection with the murder of Zaria Newton.

One of the two remaining men wanted in connection with the murder of a Brookhaven woman was killed Monday afternoon in a shootout with law enforcement officers in Copiah County, authorities said.

Allen barricaded himself in a trailer in Beauregard. Officers and special agents surrounded it.

“Shawan fired upon the officers. Shots were exchanged. He is now deceased,” Collins said.

Two Brookhaven men — Adrian Smith, 18, and Jatavious Berry, 19, are in custody in Lincoln County Jail on charges of capital murder in the death of 21-year-old Zariah Antel Newton.

Berry was arrested Sunday night. Smith was arrested at the Evers International Airport just before noon Monday, according to media sources. The Jackson Municipal Airport Authority said their police department captured Smith at 11:47 a.m. and he was turned over to U.S. Marshals.

Law enforcement agencies are focused now on the capture of Justin Anderson of Natchez.

Anderson was acquitted by a Lincoln County jury for first-degree murder in the 2017 shooting death of Billy Ray Thomas Jr. after 40 minutes of deliberations in a three-day trial. Thomas was killed in November 2017 as he was leaving the Oasis Club on South First Street.

They also came back with a verdict of not guilty for the aggravated assault charge against Anderson for the alleged shooting of Joshua Thomas, who was standing in front of his cousin as they exited the club that night.

Collins is asking Anderson’s family to convince him to surrender to authorities.

“We don’t want anybody else hurt. Tell Justin to turn himself in. There’s been enough killing,” he said.

Collins said Newton and her boyfriend received an alert about 10:30 p.m. Saturday that someone was inside their home at 202 Mason Road.

“They got an alert and just went to their house. Police were not notified,” he said.

Police learned Sunday night that Allen had kidnapped his 17-year-old girlfriend in Copiah County where she lives as part of his escape plan.

“He went there, held her at gunpoint and tried to make her take him to Jackson,” Collins said.

Collins said Allen was located in Copiah County Sunday night by an off-duty officer who spotted a car being driven erratically.

“He turned around and blue-lighted it and at that point the vehicle accelerated at a high rate of speed,” Collins said.

The car nearly hit another vehicle head on. Collins said it is unclear who was driving.

During the pursuit, Allen tried to carjack a homeowner’s car. He held the man at gunpoint, but the homeowner told him he didn’t have keys. Allen then escaped into the woods.

More than 30 officers from several agencies assisted in the search for Allen into Monday morning.

During the shootout in Beauregard, a law enforcement officer was shot in the back but was saved by the armored vest.

Brookhaven police posted surveillance video taken inside Newton’s home that appears to show all four men, at least two with guns, searching through the house. The video shows wood flying as the door is broken as they enter the home. The four men rummage through the cabinets, look in the refrigerator and then walk off camera to look in other locations in the home.

If you have information of Anderson’s location, call Brookhaven Police Department at 601-833-2424 or Brookhaven/Lincoln County Crimestoppers at 601-823-0150.

A local resident has played golf nearly every day throughout 2019. Yancy Methvien is working to break the record for... read more