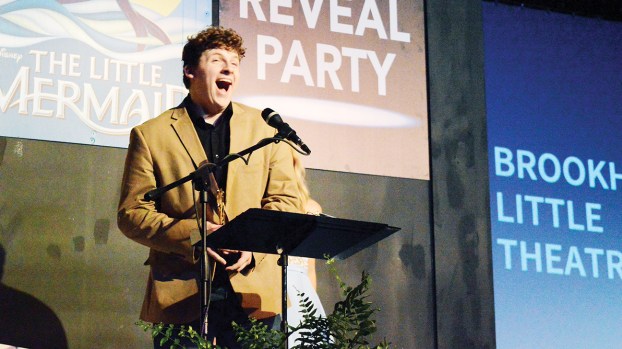 Photo by Gracie Byrne Connor Cagle receives an award for Best Actor for his role as Jack Kelly in “Newsies” at the BLT season reveal party Saturday.

A tale as old as time, an autobiographical account of a historic tragedy and a cool musical are part of the Brookhaven Little Theatre’s new season.

The first of BLT’s season passes were made available for purchase Saturday at the community theater group’s annual season reveal party and awards show.

Six shows will be performed this season, starting with “Roald Dahl’s Matilda the Musical” in October, which will have a three-weekend run as well as daytime school shows perfect for field trips.

“We’re looking for actors to come tell this piece of world history on our stage,” board member Hope Ratcliff said.

To kick off the summer, the BLTeens will host a workshop June 1-28. Performances of “Disney’s High School Musical Jr.” will be June 25-28.

Several parts for adults and children are available for each show.

“There are tons of parts for young and old,” said Nick Rocz, who stepped in as guest director for “Newsies” this past season.

Between reveals, past performers entertained the crowd with musical numbers from the shows.

Many members of BLT reflected on the previous season and spoke positive of the upcoming shows.

“You got to go to the slums of New York, and under the sea,” technician Eddie Cagle said. “They made magic on this very stage. Every show on the wall is every reason the BLT is growing.”

She also said that nearly 17,000 people came and saw shows at The Haven, allowing BLT to bring in more than $725,000 to the community.

“Disney’s The Little Mermaid” was the highest grossing show of all time for the community theater, according to Waterloo.

“All of the shows were different, but they were all amazing,” said Waterloo’s husband, Trey, a volunteer and director with BLT.

The reveal party also included awards for the past season’s actors, technicians and shows. The following awards were presented Saturday:

• Best Actress: Anna Walker as Ariel in “The Little Mermaid”

• Best Show of the Season: “Newsies”

• Volunteer of the Year: Larry Baker

It’s hot outside. You already knew that. But the National Weather Service is warning that the stifling heat will be... read more