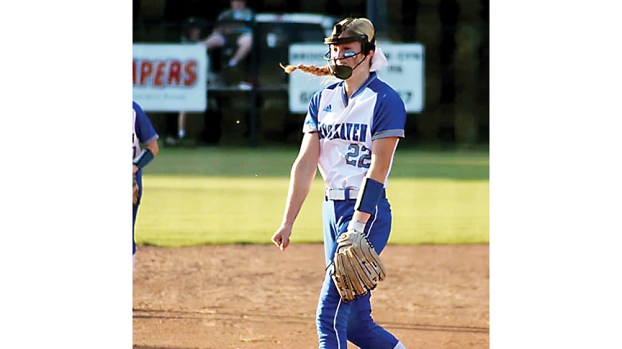 Photo by Gretchen Felder Sophomore pitcher Emily Clare Felder follows through to the plate Thursday against Silliman Institute. Felder struck out nine as BA moved to 3-0 in division play with a 6-0 win.

The Brookhaven Academy Lady Cougars (10-3-1) rode the strong right arm of sophomore pitcher Emily Clare Felder to a 6-0 win over their MAIS District 4-4A rivals Silliman Institute on Thursday night. BA is now 3-0 in division play.

The game was originally scheduled to be played at Silliman but was moved to Brookhaven with short notice. The game will be returned to Silliman on Tuesday as BA will travel to Clinton, Louisiana to face the Lady Wildcats on their home field.

Another abnormality on the night was the absence of BA coach Becky Flowers. The Lady Cougar leader was with one of her sons at a doctor’s appointment and arrived back at the field in the late innings. Her assistant Jose Acosta coached the team in her absence.

“Felder did a great job today on her pitching. She stayed ahead of every batter and was able to switch the batter’s eyes with changing speed and locations of her pitches,” said Acosta after the game.

The sophomore struck out nine and gave up just three hits in picking up the complete game shutout.

Her offense gave her a swift boost as BA grabbed three runs in the bottom of the first.

Madison Moak led the game off for BA with a double into right field. Bailee Goodson then scored Moak with a single up the middle. Hallie Creel later knocked in an RBI with a single and Madi Smith completed the BA scoring in the inning with an RBI sacrifice fly.

BA added to their lead in the fifth when Goodson was hit by a pitch to begin the inning and later scored on a fielder’s choice by Smith. A two-run home run to center field by Abby Grace Richardson, her fifth of the season, would end the BA scoring.

Moak led the Lady Cougars at the plate going three-of-four with a double and two singles. Reagan Newman also hit safely for BA.

Through the first week of the season the Wesson Lady Cobras are unbeaten and unscored upon after whipping Florence 8-0... read more