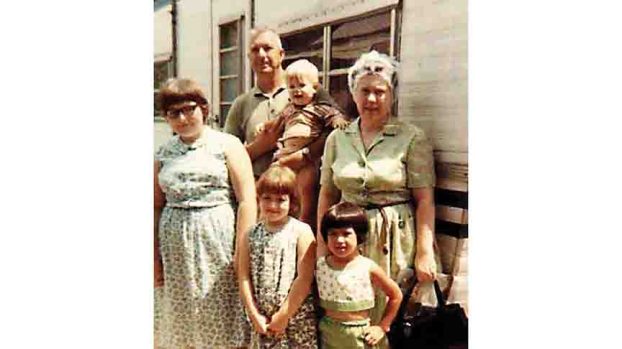 Photo submitted Brookhaven resident Tammie Santos Brewer, bottom right, is pictured with her cousins and brother with their grandparents Vance and Rachel Means in 1968 at their Gulfport travel trailer. Hurricane Camille destroyed it a year later.

Hurricane Camille, 50 years ago this week, didn’t have a dramatic impact in Lincoln County aside from strong winds and heavy storms. However, mention of the name brings back memories of frightening TV and newspaper pictures of devastation on the Mississippi Coast.

“I was young so I didn’t know enough to be scared,” Henderson said. But when he now hears the word Camille, he thinks of destruction.

District 4 Supervisor Eddie Brown just barely remembers Camille. He was still in school and recalls going to a grocery store with his parents to stock up on groceries and picking up hamburgers from a drive-through before going home to settle in.

Brown said he was probably 10 or 11 years old. He remembers it raining hard and hearing that a hurricane “tore up parts of McComb.”

On the Memories of Ole Brook Facebook group, members have recalled seeing pine trees sway and bend in strong winds, window screens blowing off of windows and heavy rain. Some remember their families housing refugees from the Coast.

“For a while, after every storm, I expected new refugees,” said Chele Whitehead, who now lives in Starkville.

Dianne Johnson Waldon ties her memory of Camille to the band Blood, Sweat and Tears and Neil Diamond.

“The radio station played ‘Spinning Wheel’ and ‘Sweet Caroline’ over and over as the storm came in. The DJs had reports coming in and didn’t have time to change the records,” she wrote.

Hurricane Camille made landfall in the late evening of Aug. 17, 1969, near Waveland. It is one of only four hurricanes to come ashore as a Category 5.

District 3 County Supervisor Nolan Williamson was a young man of 20 and living in Belle Chasse, Louisiana, working for Brown and Root oil and pipeline construction company. He and his wife and bought a new mobile home that morning, when Camille made an about-face and headed toward the Gulf Coast.

“I stayed on a boat for 2 and one-half weeks retrieving bodies while working for Brown and Root,” Williamson said.

Camille had a profound effect on many people and miles away from the Mississippi Coast, he said.

“You don’t ever take anything for granted,” Williamson said.

Tammie Santos Brewer has vivid memories of the aftermath of Camille. She was a month shy of 6 years old, and her grandfather, Vance Means, worked at the docks in Gulfport and owned a camper trailer he used to live in while working out of Gulfport. Her grandfather was home in Brookhaven for the weekend when Camille hit.

Days later, the family went to Gulfport to check on his camper. They found it upside down, with its door lodged against a telephone pole. Her grandfather couldn’t get in, so he busted a small window in the front and sat the young girl down inside the camper. He told her the items to look for and she handed them out the window.

“To this day, I can still remember the smell,” Brewer said. “It was the most awful smell ever. Rotting items, stale sea water and trash everywhere on the sides of the road.”

Part of the stench was from rotting meat from cargo containers left at the Port of Gulfport. And there was the smell of death. Camille, with a storm surge of 24.6 feet in Pass Christian, was blamed for a total of 256 deaths, including 172 people in Mississippi.

Brookhaven Alderwoman-at-Large Karen Sullivan remembers “feeling safe” with her two daughters as they rode out the hurricane in Europa, where she and her husband lived at the time.

“I could not imagine what it was like and as it turned out, it was unimaginable,” Sullivan said.

Her husband, football coach Doug Sullivan, was company commander of the Kosciusko National Guard unit, and was called out to help with recovery efforts on the Coast.

“I remember my husband being gone a long time,” she said.

Sullivan recalls her friend Shirley Piper worrying about the safety of her mother, who was living in a Methodist independent living facility in Biloxi. Her mother made it safely to her home. Piper later found a banana tree plant in the facility ruins while searching for her mother’s belongings in Biloxi, and gave it to Sullivan.

“I have a memorable banana plant and a brand-new granddaughter named Camille Elizabeth, Sullivan said. “Her mom probably doesn’t know of the disaster.”

Murder suspects back in court Tuesday

Three men charged with capital murder of a Brookhaven woman shot to death during a burglary will be back in... read more