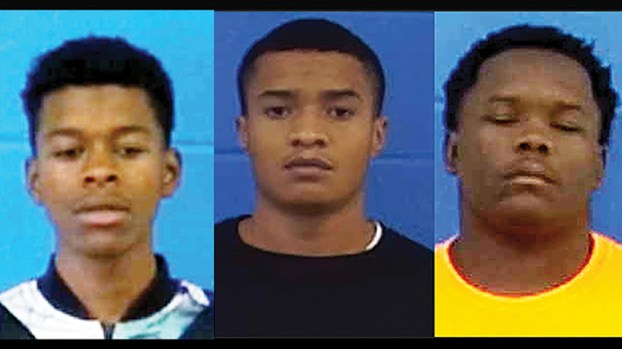 Trio bound over to grand jury

On the night his girlfriend was fatally wounded after she surprised intruders in their home, Javian “J.J.” Richardson hid in the bushes and played dead.

That’s according to testimony Brookhaven Police detective LaToya Beacham gave in municipal court Tuesday as she described the night 21-year-old Zaria A. Newton died at King’s Daughters Medical Center. The woman was shot to death July 20 during a burglary at her home on Mason Road.

Beacham signed the affidavits charging three men with capital murder in connection with Newton’s death and was the only officer called to the stand Tuesday. In unusual circumstances, she repeated her testimony three times — once for each of the preliminary hearings.

After the end of each of the three separate preliminary hearings, City Judge Brad Boerner ruled there was probable cause for them to be bound over to the grand jury.

It will be up to the Lincoln County grand jury, which typically meets a few times each year, to decide if any or all of the trio should be indicted for Newton’s murder.

Boerner also kept the bonds the same for each defendant.

At initial appearances held July 30 for the three men, he set bond for $2 million for Adrian Smith, 18, of Brookhaven, because he considered him a flight risk. Smith was arrested at the Evers International Airport by the Jackson Municipal Airport Authority July 22.

The charge remains the same for all three — capital murder for killing Newton while engaged in a felony. The men allegedly were burglarizing the house at 202 Mason Road that Newton shared with Richardson, when the couple came home and confronted the intruders.

Beacham said police received a call of shots fired at 10:30 p.m. at 202 Mason Road. While on their way there, police were told the victim was taken by personal vehicle to KDMC and was pronounced dead at 10:36 p.m.

Beacham said Lincoln County Deputy Coroner John Riggs’ preliminary report shows Newton was shot once in the chest and once in the left hip. Neither bullet was recovered at the scene, she said.

An autopsy report by the state crime lab is not complete.

She said Richardson was interviewed by Capt. Clint Earls, who said Richardson told him he and Newton were at Skate Zone when they both received text alerts on their phones that movement was detected in their house.

They headed to Mason Road and watched the surveillance video on the phone, where they observed “four to five males in his home,” she said.

According to the interview with Earls, Newton jumped out of the car from the front passenger side and entered the house and Richardson followed. Richardson told Earls he heard her talking and heard her say ‘Get out of my house,’” Beacham said.

“He said he heard gunshots fired and he and Newton ran out of the house in different directions and he fell in the bushes and played dead until he saw the intruders leave,” Beacham said.

Richardson turned his phone over to Earls and the police department posted the surveillance video on its Facebook page. The next day, they received several anonymous tips through CrimeStoppers.

After Berry surrendered to police, he identified himself, Smith, Anderson and Shawan Allen as the four men in the video. Allen was killed in a standoff with police in Copiah County July 22.

During his interview with Beacham, Berry said Allen and Anderson held the guns and he was the getaway driver of his girlfriend’s black Dodge Charger.

Baker said there is no proof that his client was involved in the crime.

“While watching the video, the person who was identified as Justin Anderson pulled the video camera down, or knocked it down,” Beacham said. “The video only shows him holding the gun.”

“What proof have you got that he shot anybody?” Baker asked.

“We have people that have identified him as being the person on the video with the gun and we have a dead female that was shot in her home during the same time that Mr. Anderson was in her house with a gun,” she said.

“But nobody saw anybody shoot anybody, did they?” he asked.

Barrett argued $2 million bond is excessive given that one of the suspects identified as having a gun during the incident — Anderson — got only $1 million bond. He said Smith, who admitted he was at the scene that night, has family in Brookhaven and shouldn’t be considered a flight risk, though he was stopped at a Jackson airport after Newton’s death.

“He’s never not shown up for court, in fact I don’t think the young man has ever been in any trouble in his life,” Barrett said.

During testimony, Beacham admitted that none of the three men were swabbed for gunshot residue when they were placed in police custody. The state crime lab doesn’t process gun shot residue kits at the present time because of its backlog.

Grocery store on track to open this month

Less than two weeks. That’s what Parker Sullivan of Sullivan’s Grocery says they’re shooting for to have the city’s newest... read more