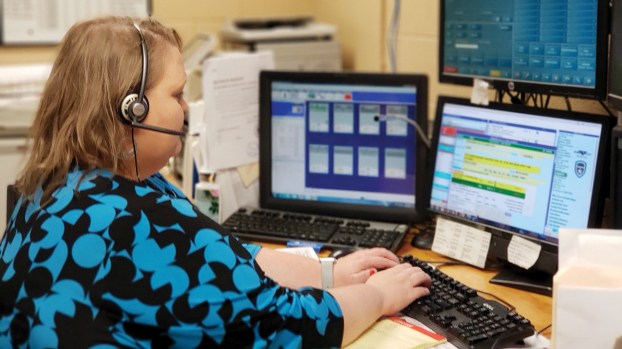 Photo by Donna Campbell Dispatch supervisor Vicki Magee talks to a caller Thursday in the E-911 office at the Lincoln County Sheriff’s Office.

Lincoln County dispatchers at the ready for the ring

The phone rings and everything stops.

The dispatchers in the E-911 office are masters of multi-tasking, answering emergency calls that run the gamut of “Can you send someone to check on why there’s someone walking down my street?” to “Please send help, I’ve been shot.”

They never know what it will be, but the dispatchers at the Lincoln County E-911 office are at the ready for the ring.

On this particular Thursday, three women were manning the mics in a small office tucked away within the maze of hallways behind the main entrance of the Lincoln County Sheriff’s Office. Each sat at a desk before a multi-screen panel. Each of the six screens serves a purpose and sometimes they’ll use more than one on a call.

Most everything they’ll need for a 12-hour shift is within those four walls — sink, refrigerator, microwave, Keurig and toaster oven. The bathroom is down the hall or they might not ever leave the confines until their shift is over.

During the day, there are three dispatchers, including supervisor Vicki Magee. Magee, who has answered dispatch calls in Lincoln County for nearly two decades, works 8 a.m. to 5 p.m. Monday through Friday. The other dispatchers work 12-hour shifts — five days one week and two days the next for an 80-hour pay period.

They also answer the landline calls that come into the sheriff’s office.

When they’re not on calls, they’re entering data into the computers, from deputies’ times in and out for their timesheets, to indictments, writs, warrants and National Crime Information Center reports of stolen items.

“You have to be able to multi-task. Be able to take on multiple things at one time,” Magee said. “Everybody is not cut out for it. I have interviewed, I have hired people that after the end of their probation training period they’re like, ‘I’m sorry, I just can’t do this.’ They just end up giving up because it’s just overwhelming for someone not used to being around the life of law enforcement.”

That’s not always the case, though.

“Sometimes it’s quiet,” she said. “You could hear a pin drop in here. And then there’s sometimes we’re all doing everything and still needing at least six more hands.”

Magee, a Bogue Chitto graduate, worked as a dispatcher for a security company in Jackson straight out of high school. She’s been employed by Lincoln County for 18 years.

The best part of her job is knowing she helps people.

“I know that I’ve been on calls where I’ve actually saved lives before,” Magee said.

When a call comes in, dispatchers ask about the emergency, but the most critical piece of information is always the location.

With 911, most land lines pop up immediately on one of the screens in front of the dispatcher. They ask to verify it. For calls from cell phones, it can take a little longer, as much as 20 seconds for the information to show up.

Then the questions begin. Dispatchers ask for as much information as they think they’ll need, all the while dispatching help and assessing the situation.

“I’m going to try to get in as many questions as I can for the officers’ safety, to try to figure out what’s actually going on,” Magee said.

The questions may sound like a lot when someone is calling for help, but the more information dispatchers have, the better prepared the first responders will be.

“A lot of time it’s hard to get answers out of people because they’re so hysterical,” said Jenna Rigaud, who has worked with Magee for seven years.

“Sometimes you just have to take control of that call,” Magee said.

In her 18 years, Magee has heard it all — some of the worst-case scenarios played out in her headset.

She feels a connection to some of the callers, and does what she can to show compassion and give comfort.

When they need to be there for a caller, they don’t hang up.

“Until someone arrives, I’m going to be there,” Magee said. “That voice. Sometimes that’s all people need.”

Members of a union representing communication workers plan to picket their company over unfair labor practices. The strike against AT&T... read more