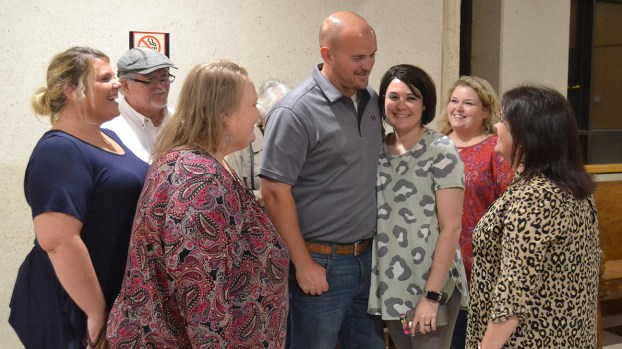 Photo by Donna Campbell Lincoln County Sheriff’s Office investigator Ian Smith, surrounded following the election by some of his supporters, was elected to Justice Court Judge Post 1 Tuesday in a runoff against incumbent Joe Portrey.

While voters across Lincoln County were tasked with choosing the winner of the chancery clerk Republican runoff, only some of the eligible voters were able to cast ballots for a supervisor, a judge and a constable.

Ian Smith also won his race outright, beating incumbent Post 1 Justice Court Judge Joe Portrey 2,428 — 58.56 percent — to 1,714. Without a challenger in November, Smith will be sworn in as judge in January.

Two others will face Democratic challengers Nov. 5 for the general election.

The runoff election across the state

As of 5 p.m., the Secretary of State’s Office had received several dozen phone calls with questions concerning various election issues which include affidavit voting, assistance at the polls and crossover voting.

According to the Secretary of State’s office, the following issues were reported at select polling places across the state including:

• At the Burgess precinct in Oxford, one TSX machine malfunctioned. Nineteen votes were cast on the machine before the problem was reported. The county dispatched a technician to the precinct and the tablet was replaced.

• Each political party’s county executive committee is responsible for providing testing on TSX machines. Both parties contracted with the county election commission and the county technician to provide accuracy testing for this machine and the machine operated correctly prior to the election.

• Each political party’s county executive committee is responsible for providing testing on TSX machines. At the request of the parties, the Circuit Clerk and the county technician provided accuracy testing for this machine and the machine operated correctly prior to the election.