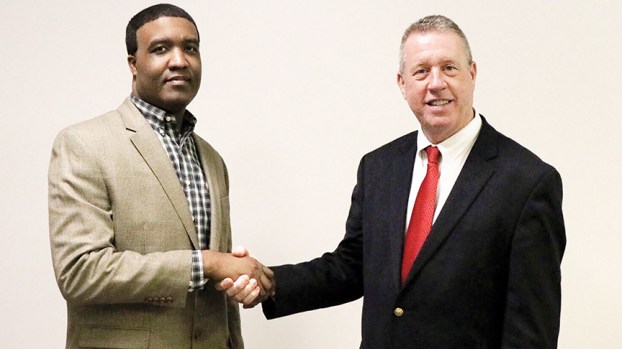 Photo submitted Patrick Brown is welcomed to his first meeting of the Brookhaven School District Board of Trustees Tuesday by Superintendent Ray Carlock. Pictured are, from left: Brown and Carlock.

Patrick Brown, the technology coordinator for Mississippi School of the Arts, took an oath of office Tuesday to become the newest member of the Board of Trustees for the Brookhaven School District.

Brown was appointed earlier this month by Brookhaven Mayor Joe Cox and the nomination was passed by a majority of the Board of Aldermen.

The Board of Trustees consists of five members — three appointed by the mayor and board of aldermen and two elected by the people who live outside the corporate limits. The term of office begins on the first Saturday of March following the appointment or election of a trustee in February. Each member serves a period of five years so the term of one member expires each year.

Brown is replacing James Tillman, who stepped down for health reasons prior to his term ending.

Tillman was not able to attend the meeting. Superintendent Ray Carlock plans to visit Tillman at home and present him with a wooden gavel, which he showed to the board.

“This is just a token of our appreciation for all the wisdom that he had as a board member here and the influence that he had on us making really good decisions. We’re very, very thankful for that,” he said.

Smith, who has sat beside Tillman during her time on the board, said he will be missed.

“He has shown me a lot of mercy and grace over six years serving with him,” she said. “He’s a pillar of this community and I certainly appreciate his giving to our district through his passion and his life’s mission. He’s a very valuable person in our school district.”

“That’s a very large chair to fill,” he told Brown. “At the same time, we’re thankful to the mayor and the Board of Aldermen for this wise choice that they’ve made and we look forward to the years of working together and having a positive influence on the community and our school.”

Brown signed his oath of office prior to the meeting beginning. He agreed that Tillman left “big shoes to fill” and he will be relying on his fellow board members for guidance.

Also at the meeting, the first of the new school year, the trustees rotated positions for the yearly reorganization of the board. Shell is the chairperson, Smith is vice chairperson and Massengill is secretary. Harrison, who has served in all of the positions, is serving this year as a member along with Brown.

“Our newest member, Mr. Brown, he’s placed at the bottom and he’ll slowly work his way toward being the next president,” Carlock said.

“Yes, in five years, so you’ve got plenty of time to learn,” Shell said.

The board’s next meeting is Sept. 24 at 6 p.m. in the district office next to Brookhaven High School and Panther Park.

For 41 years, Henry Ledet has spent his days at Brookhaven’s iconic building at 100 South Jackson St. It’s the... read more