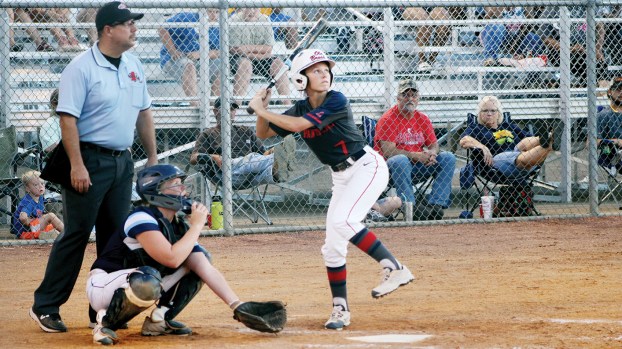 Photo by Cliff Furr Emma Campbell of Brookhaven High looks at a pitch earlier this season against North Pike. Campbell had an RBI single Tuesday in a 13-9 win over Bogue Chitto.

Two weeks after dropping a close slow-pitch loss at Bogue Chitto the Brookhaven High Lady Panthers were able to gain a measure of revenge by beating the Lady Bobcats 13-9 Tuesday night in Brookhaven.

Errors would hinder Bogue Chitto early as the Lady Panthers (7-5) jumped out in front to take control for most of the game. The Lady Bobcats (4-2) hung in and eventually tied the game up in the sixth inning. They were only to see the tie not hold though as Brookhaven retook the lead quickly.

“We were able to take advantage of errors tonight and come up with hits that we needed,” said BHS coach Mandy Vinson. “We still need to cut down on walks and cut out the errors. We had some girls sick and the girls that played in their place stepped up for us tonight. Overall, I’m proud of the team.”

Despite the Lady Bobcats striking first on a RBI double by Julianna Frazier, errors committed in the bottom half of the first would put the Lady Panthers out in front.

Brookhaven scored their first two runs of the night cleanly off a Madi Miller RBI single and a Lulu Cook RBI single. BHS then tacked on three more runs, all off errors.

Leading 5-1, Brookhaven added three more runs in the second as both Miller and Cook drove in another RBI each. Fellow senior Lynsey Nations also drove in a run in the inning.

The Lady Bobcats slowly tried to get back in the game in the third, scoring one run as Juli Anna Bartram scored a runner off a single.

Although Brookhaven managed to load up the bases in the fourth inning, the Lady Panthers could only push one run across home plate.

The Lady Bobcats tied the game 9-9 in the top of the sixth when Frazier, batting with the bases loaded and two outs, delivered a bases clearing double.

BHS won the game in the bottom of the sixth as Miller drew a walk to start the frame. She moved to second on a Nations single. The bases were then full when Cook hit a single to get aboard. Kyla Henderson hit an RBI single to score Miller and Kyja Willis hit a sacrifice fly to push Nations across.

The lead grew after a couple of clutch hits by younger Lady Panthers. Novalee Sullivan hit an RBI single to push across one run and then Emma Campbell capped the scoring with another RBI single.

Kyla Henderson was the winning pitcher and Cook went 4-of-4 at the plate with a pair of RBIs. The Lady Panthers had 15 hits as a team.

“Hopefully this game will be a learning curve for the girls,” said BC coach Kris Smith. “When you play good defense and hit the ball, you usually come out on top. We just struggled at both ends tonight. We had a lot of errors and walks, but you can’t take anything away from Brookhaven, they’re a good team.”

The 2019 campaign kicks off for coach Glenn Davis and his Copiah-Lincoln Community College Wolves with a 6:30 p.m. matchup... read more