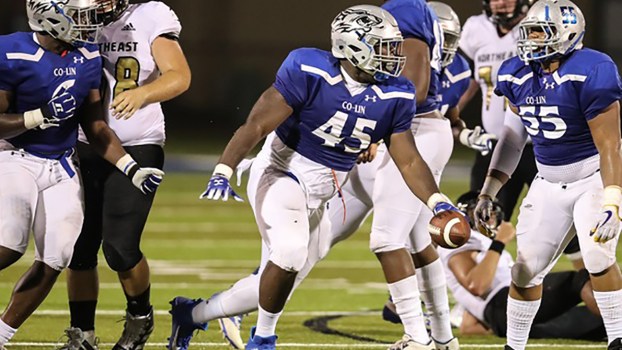 Coming off a 14-7 defensive battle against Northeast, the No. 11 ranked Co-Lin Wolves turn their attention to MACJC South Division play as the team takes on Pearl River Community College Thursday. The matchup is the first away game for the Wolves and the first home game for the Wildcats as they have taken both Itawamba and East Mississippi on the road. Kickoff is slated for 6 p.m. in Poplarville.

Co-Lin (2-0) is looking to find more offensive rhythm this week as the team struggled against the Tigers with just 130 yards of total offense and an 0-for-12 performance on third downs. Fortunately, the Wolves have a history of success against the Wildcats on the offensive side of the ball, averaging over 373 yards per game through the last five matchups. Co-Lin looks to utilize the duel running back threat with a combination of JJ Jernighan and Drexlan Allen in the backfield. The pair combined for 58 yards on 17 carries against Northeast and are both itching for breakout performances.

The bright spot in Co-Lin’s passing game last week was Danny Clark’s 55-yard connection to Malik Heath for a score, but the team is looking for more in division play. Despite the lower yardage from week one, Clark connected with six different receivers.

Defensively, Co-Lin dominated as they held Northeast to just 180 yards on 84 plays. R’Tavius McGee led the team with 10 tackles and two tackles for loss, while Hayden Hill wrapped up eight. Jordan Davis, Jalen Bedell, Kason Chinn and Sherman Mitchell all wrapped up sacks in the game, but Tyrus Wheat stole the spotlight with two interceptions including an 86-yard pick-six. The sophomore also posted six tackles with two for loss.

PRCC (1-1) suffered a loss to East Miss last Thursday, 49-15, but had strong offensive performances from many players. Lance Stewart led the Wildcats’ rushing attack with 101 yards on 19 carries and a score, while Khalil Levy cracked the century mark in receiving yards with 123 on four receptions and a score. Pearl River’s Terrence Humphrey led the way at quarterback with 182 yards on 12-of-30 passing.

Noah Mitchell led the team on the defensive side with 10 tackles and one sack. Darrell Sims Jr., Branson Davis, and Ross Barnett also all wrapped up sacks in the matchup.

Last year’s contest between PRCC and Co-Lin was all Wolves as the team ran away with a 49-0 victory, 42 of which came in the first half. Jernighan finished that game with 37 yards on seven carries, while Antoine Robinson led Co-Lin’s receivers with 64 yards and two scores on three receptions. Heath finished that early-season win with 52 yards and a touchdown, while Kundarrius Taylor also got in on the scoring action with two receiving touchdowns.

Early on, it looked like Bogue Chitto and Springfield High (Louisiana) were going to have a shootout Friday night on... read more