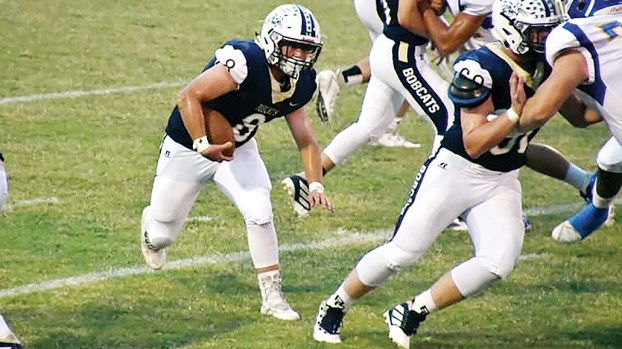 Photo by Stacy Leake Sophomore running back Colten Bales looks for a hole in the Mize defense Friday night.

It was a typical Friday night in Bogue Chitto as the Bobcats hosted the Mize Bulldogs on Troy Smith Field.

It was all Mize (4-0) from the start to the finish as the visitors from Smith County took a 47-3 win.

The Bobcats (2-2) offense led by J.T. McCaffrey would hit the field first, but the Mize defense denied them of any positive yardage.

Bogue Chitto punted the football to the Bulldogs. Austin Haynes of Mize started their drive with a 39-yard run. That would set the tone for the whole game.

The Bulldog offensive punched it in the end zone with a quarterback draw right up the middle. The Bobcats got the ball back and were able to get some positive running from McCaffrey and Reid Smith.

Carson Price capped off the drive with a 32-yard field goal for BC to end the first quarter. The second quarter it was all Bulldogs.

BC had four possessions on offense and thee or them ended in punts while the other was a turnover on downs.

The second half would be the same for the Bobcats. The offense could never get anything started and it seemed like the Bulldogs were clicking on all cylinders.

Defensively for the Bobcats Colten Bales led the team with 12 tackles. Reid Smith had nine stops and a fumble recovery.

“Mize came ready to play and we gave up too many big plays on defense,” said BC coach Gareth Sartin. “We were able to move the ball on them at times, but we just have to come to work on Monday and be ready to get better.”

The Pisgah Dragons (4-0) were too much for the Loyd Star Hornets (1-3) to handle on Friday night as the... read more