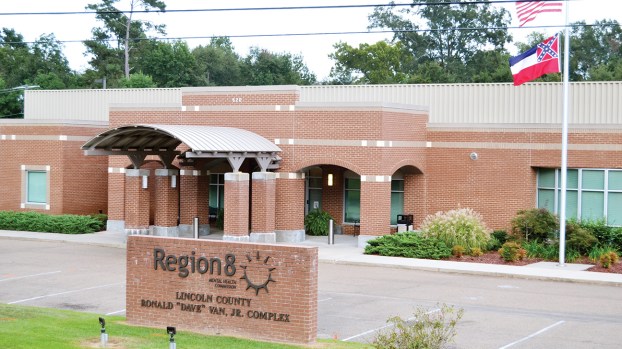 Instead of facing the Lincoln County Board of Supervisors to ask for a handout, the director of Region 8 Mental Health Services touted the services offered and has the desire to do more with less.

“We have an array of services that no one else has,” said Executive Director Dave Van. “We have people who are moving from outside of our state into our region because they can’t get mental health services in other places. There isn’t any other region anywhere in the southeast that I know that all the services that we have.”

Region 8 is starting its 10th year in October and receives allocations of $50,000 annually from Lincoln County. The main facility is located on Hwy. 51 in Brookhaven.

He said he has not asked supervisor for increased allocations since its second year “and we’re not asking for additional allocations today. As long as we can pay our bills we’re not going to ask you for support and I know you’ve got other things to spend your money on like roads and bridges.”

Van said the budget for the fiscal year ending Sept. 30 shows expenditures of $5,559,548 on the Brookhaven campus, which includes the Region 8 inpatient psychiatric facility behind King’s Daughters Medical Center.

Region 8 employees 111 people, but Van said he could hire at least six more each month if qualified employees were available.

“The state department requires a master’s degree in a mental health-related field and our institutions are not putting out those numbers so we’re doing the very best that we can,” he said.

Employment turnover is less in Brookhaven than anywhere else in the region, he said.

Van said Region 8 served 18,700 individuals in the five-county region in the current fiscal year and as many as 7,000 had no health insurance.

Indigent request applications are offered to those who meet the criteria and individuals can be served on a sliding scale fee which can be as little as zero.

“I can tell you I get five of those requests a day and have for the last five years and I’ve never denied one of them,” he said. “So we’re serving everybody regardless of their ability to pay and certainly doing as good a job as anybody in the state within the system. We served those individuals exactly like we did anybody who does have good health insurance.”

Van gave kudos to Chancery Clerk Tillmon Bishop who serves as a commissioner on the Region 8 board.

“He does a great job of allocating for Lincoln County citizens,” Van said. “He attends all of our meetings and fights for everybody in Lincoln County. We appreciate his assistance, his knowledge as well as his office because all of our involuntary commitments come through his office.”

Van said Region 8 is not looking to expand to a larger coverage area. Although the need is there, the lack of qualified employees available would hinder them in continuing services already offered if they increased the coverage area to take in other counties.

Based on population, Region 8 is already the largest of the 14 regions in the state, he said.

“The problem to expanding services, is that when you’ve got five counties like we do — Brookhaven (Lincoln County), Madison, Copiah, Simpson and Rankin — tax dollars come to the citizens of those five counties,” he said.

They do, however, help other areas with manpower and training when needed, he said.

MIAs, POWs to be remembered Friday

Veterans of Foreign Wars is holding a ceremony for POW/MIA Remembrance Day Friday at 8 a.m. in front of the... read more