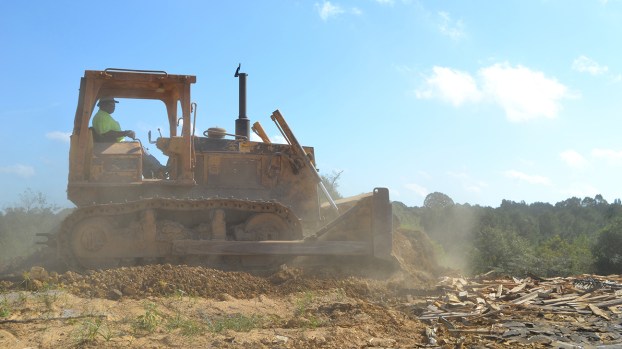 People for decades have buried their trash, and now landfills, such as the one owned by Brookhaven, are filling up.

The city’s landfill, which occupies 154 acres on County Farm Lane, has only one area left that is currently usable for solid waste, Public Works Director Keith Lewis said.

A total of 74 acres are in use. Most of that space is in different stages of storage and decomposition as the waste (vegetative debris), is returning to the earth in its natural state.

“Twelve acres are being actively used on a daily basis,” Lewis said.

About six acres are being used to bury biodegradable waste and about five acres are used for a transfer station.

City officials agree that the land currently permitted to accept waste will fill up within a couple of years, but it’s not an immediate issue of doom and gloom, City Clerk Samantha Melancon said.

The city owns several acres of nearby land that can be used for a solid waste landfill, City Clerk Melancon said.

The Mississippi Department of Environmental Quality, which regulates landfills to protect public health and the environment, will determine when it’s time to permanently close the landfill. And when that happens, it will be too late to start planning for a new landfill.

“The city has to have a landfill,” Melancon said. “The city will have no choice but to open a new landfill when the time comes. We know it’s coming.”

“The problem is that it costs so much to close one and get one ready. It takes time and it takes money. You don’t just dig a hole and dump waste in it.”

The few acres of land available buys the city some time.

The city has begun collecting an additional $2 that shows up on water bills to help meet part of the costs of closing the landfill and opening a new one,” Melancon said.

Waste-Pro had taken care of the city’s solid waste disposal until last year. Its contract did not work out so city officials agreed to cancel on May 15, 2018, Melancon said.

City officials wanted Waste-Pro out because it had been missing garbage pickups. Daily Leader archives show.

The city’s street crew began picking up solid waste and taking truckloads to the landfill.

Melancon said she could only give a ballpark figure on what the solid waste program costs. Money spent on the program is included in the costs of the transfer station and household trash pickup, she said.

In the past 11 months, the city has spent $751,761, which includes those costs plus money spent on maintenance on trucks and other heavy equipment used for solid waste, fuel, personnel and utilities. Also, a third-party grinds trees and large limbs into mulch at the landfill and hauls it away.

How a landfill operates

First, a landfill is not a dump. A dump is just that: a place, usually a hole, where all sorts of trash, old appliances and such, are dumped.

A landfill is a discreet area of land — away from homes and businesses — used to store and monitor waste from start to finish. The land must not be near waterways, housing areas or other populated areas.

The MDEQ monitors landfills while in active use. The monitoring period is 30 years after a landfill has closed if it contains hazardous waste, which the Brookhaven landfill does not, according to the MDEQ.

Land designated as a landfill is lined off with acres to be used immediately and others to be used in the future. A composite liner (a heavy, flexible membrane) is placed over two feet of compacted soil to protect groundwater and the underlying soil.

Landfills that accept household garbage, such as rotting food, have more elaborate operations that allow the site manager and MDEQ to monitor groundwater and gas emissions that occur as those types of waste break down.

MDEQ also monitors solid waste landfills, such as the one in Brookhaven. The solid waste is biodegradable vegetative debris, such as leaves, limbs and lawn clippings, Keith Lewis said.

The city used to put wood from abandoned buildings into the landfill, he said, but it was taking up too much space. Now, people who own land are responsible for their own clean-up.

City workers are hauling about 45 loads of solid waste a week, and each load weighs about 2,000 pounds, Lewis said. That’s about 1.8 million pounds of rubbish a month, or about 900 tons.

Six people in the solid waste department work, two to a truck, in three trucks, to collect solid waste and bulk waste left in front of Brookhaven residents’ homes, businesses and institutions.

“They never get caught up,” Street Department Superintendent Burt Wilson said of the workers.

They pick up mostly anything that’s left at the roadside, except for hazardous waste. It’s not uncommon for the workers to haul off kitchen sinks, tubs and mattresses, Wilson said.

Everything brought into the landfill is checked to make sure it’s safe to be buried. Batteries, paint, computers, TVs and other hazardous materials are not allowed.

Batteries, for instance, contain heavy materials such as mercury, lead, cadmium and nickel, according to the Environmental Protection Agency. When placed in landfills, the hazardous metals can leach into the soil, groundwater or surface water, the EPA says.

After items are dumped in the city landfill, a full-time worker uses a bull dozer to run over the waste to compact it. Several inches of soil are then layered over the area.

This is where the transfer station at the landfill comes in.

On to the transfer station

Riverbend Environmental Services operates the transfer station, which is a temporary sorting point for incoming waste. Riverbend also picks up recyclables in Brookhaven,

The city street crew also picks up bulk waste, such as appliances and other items that can’t go into the landfill. Those are left at the transfer station for transport to another location.

Arrow Disposal Service Inc. picks up bags of garbage weekly and takes them to the transfer station, where they are sorted and taken elsewhere.

The landfill is fenced in and has a gate that is locked at 5 p.m. on weekdays and throughout weekends.

People who bring commercial waste into the landfill are charged $25, and $45 if their waste needs to go into the transfer station. Wilson said.

A dirty load is a load that has household trash or hazardous waste mixed in with the solid waste.

“Paint, we don’t handle,” Wilson said. “We are not authorized to deal with hazardous materials.”

Some people try to “sneak them in” with the solid waste, and street crews have to separate them so they don’t wind up in the landfill, Wilson said.

“MDEQ doesn’t mess around. Any violation, like throwing batteries, paint, computers and other types of hazardous items in a landfill can bring penalties of $100 a day.”

The city has six more acres it can open up when its current landfill is full, MDEQ spokesman Robbie Wilbur said.

Brookhaven’s landfill doesn’t have the problems of some types of landfills. For example, rotting garbage can cause harmful gases that, when mixed with the air, can cause breathing problems. Food trash and some other types of waste have a foul smell that can cause nausea. In short, items banned from landfills can harm the environment and waterways, and cause respiratory problems.

The city has permits for Class I and Class II rubbish sites, but only operates a Class I rubbish landfill, he said.

Also, small appliances that have had the motor removed (except for refrigerators), furniture, glass, crockery and metal (but not metal containers) can be accepted, according to the state permit.

The Class II landfill would allow a smaller amount of those accepted by a Class I landfill.

MDEQ has a list of accepted and prohibited solid waste items online at mdeq.ms.gov/wp-content/uploads/sites/18/2017/06/ClassRubbishSites.pdf.

The first step to permit a new area for solid waste is to follow the Lincoln County Solid Waste plan and propose the area to the Board of Supervisors, Wilbur said. The process includes soliciting public input and a public hearing.

After getting public input and having the area included in the county Solid Waste plan, MDEQ would review the local plan and its specific details.

If a new area has already been considered and included in the county plan, a public hearing would not be required.

The second step, Wilbur said, would be to file environmental permit applications (for a solid waste permit and a storm water management permit) with MDEQ.

“The length of this process is difficult to speculate on because it is highly site specific and is based on the permit application as well as whether or not there are problematic siting or design issues that may arise,” he said.

Once the current landfill is closed, the city must maintain the site in “an environmentally protective condition,” Wilbur said.

In some areas of the nation, cities and counties are turning methane created in the breakdown of household waste into an alternate form of energy.

“We currently have five landfills in the state that do use landfill gas as an alternate energy source. Rubbish landfills do not typically generate methane gas in a quantity that would support re-use,” he said.

The city wants to increase recycling from its present 23 percent to 45 percent, its website says.

About 75 percent of American waste is recyclable, but only 30 percent is recycled, according to the EPA. The average person makes more than four pounds of trash a day and about 1.5 tons of solid waste a year, the EPA says.

These EPA estimates show why recycling is more preferable than burying them: Plastic takes more than 400 years to degrade, while glass bottles take about 4,000 years to decompose.

Those are talking points that are leading to more stringent federal and state regulations.

Wilson said it would help if more residents started separating their own trash properly and recycling everything they can.

“We’re in better shape than most cities because we have a recycling program,” Fernald said.

The city holds a hazardous waste collection once or twice a year. But there are some ways that residents can recycle what they would normally throw away.

Since the EPA forbids the disposal of batteries in landfills, people are encouraged to drop off their rechargeable batteries at any Best Buy, Lowes, Radio Shack, or other stores that sell batteries.

The website call2recycle.org tells how to find stores near you, and how you can ship batteries to a location for proper disposal.

To help save landfill space, residents could put small piles of debris, twigs and leaves by their garbage pickup container, to be picked up by the garbage truck. If it’s in bags, the solid waste crew won’t pick them up.

Garbage around the city is picked up once a week. Recycling bins are emptied on Mondays.

There would be less waste for street crews and garbage trucks to pick up if more residents separated their own trash and recycled what they could, Lewis said. The city’s recycling program takes in clean paper, aluminum and metal cans, newspapers, magazines and plastic bottles, but not glass containers.

Two Brookhaven police officers killed in the line of duty a year ago were remembered for their bravery Sunday at... read more