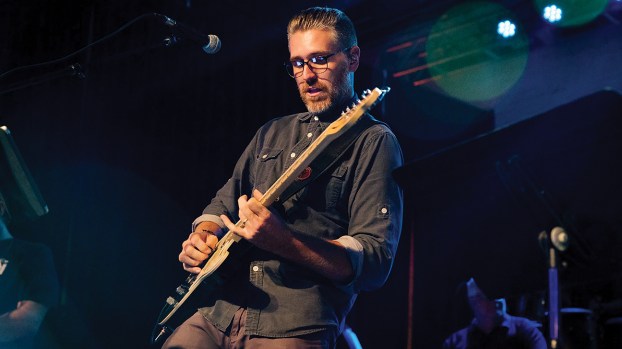 At least in October, Thursday is the day for music in downtown Brookhaven.

For the past three years, local musicians have made Trinity Park a regular spot for live music during the months of April and October. The park is connected to the Church of the Redeemer on 224 West Monticello St.

Shaw Furlow, local musician and organizer of Music and Art at Trinity Park, said music will start just after noon and continue until a little before 1 p.m., giving visitors time to bring their lunch to the park. He encourages listeners to bring a chair or a blanket to sit on.

He’s been organizing the event since 2016, when he noticed the park during his early morning walk.

“I live downtown and I walk downtown,” he said. “I’d see that park there and I could only remember it being used a couple of times. We needed something like this and I started putting it together.”

Kicking off the music will be Topher Brown on Thursday. Son of Ricky Brown — one of the original Brookstock performers — Topher Brown has been playing music since he was a young child.

“I grew up in that scene,” he said. “I learned to play guitar by emulating him and the rest of history. When I was 18, I decided music was what I wanted to do and made it a mission to play as much as I can.”

Brown said he has a broad and eclectic taste for music, and he’ll be bringing some of his own songs to the park Thursday, along with a few covers.

“I draw influence from a ton of different places,” he said. “I’m just a huge fan and student of music.”

Brown said he thinks it’s their responsibility as local musicians to ensure that a music scene continues for the next generation.

“It’s up to us who have come up in the music scene to keep it alive,” Brown said. “There’s a lot of young talent that’s still to come to fruition here. It’s really encouraging to know there are young folks doing music.”

Furlow said that dedication to the local music scene — their desire to keep the music playing and the venues open — is widespread in the community.

“Nobody gets paid for this,” Furlow said. “Unless they’ve got a commitment, rarely have I been turned down by anybody. That goes to show not only is the scene alive, but the people who make that scene are volunteering and doing all they can to help it.”

Furlow said that not only does a vibrant local music scene attract visitors from out of town, it also improves the quality of life for residents. And the key to keeping that music scene alive, Furlow said, is to make sure there are places for musicians to play, and a place for people to listen.

“It comes down to venues,” he said. “If you build it, they will come.”

In addition to music, Furlow said there will be shirts available for sale at the park. Profits from the shirts will to toward maintaining the park. Furlow said he’s also looking for artists who are interested in exhibiting their work at the park.

“The one thing we’re still lacking in that area is the artists,” Furlow said. “The original idea was to have people come and paint or photograph or draw while the music is going, and maybe have some people who will exhibit their work.”

Furlow said art can’t be sold at the park because of its location on church grounds. Furlow said artists interested in exhibiting their work should contact him at facebook.com/r.shaw.furlow.

Wesson man must pay $117K in back child support

A Wesson man who pleaded guilty Monday to three felony counts of non-support of a child must repay more than... read more