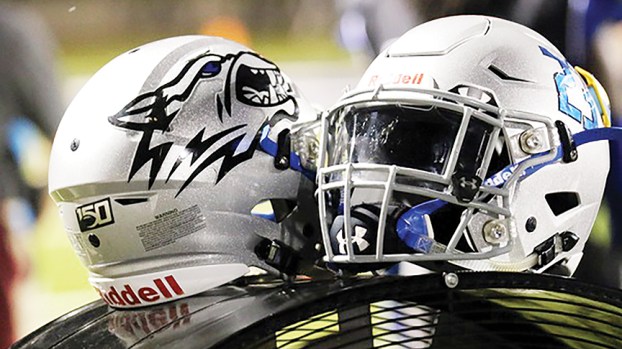 Photo by Co-Lin Sports Information The Wolves will host the East Central Warriors tonight in Stone Stadium in Wesson.

The No. 15 Copiah-Lincoln Community College Wolves are looking to bounce back in week six after back-to-back losses against a pair of NJCAA top-10 opponents, Northwest Mississippi and Gulf Coast.

Thursday the Wolves play host to the East Central Community College Warriors of Decatur in an MACJC South Division matchup in Stone Stadium. The Warriors enter the game with a 3-2 record after falling to the then-ranked No. 5 East Mississippi Lions last week, 24-0. However, the Warriors are 2-0 in division play as they have picked up two shut-out wins over Southwest and Pearl River.

After last week’s 38-20 loss to Gulf Coast, the Wolves are also 3-2 overall but are 1-1 in division play. Kickoff for the contest is set for 6:30 p.m. and fans are asked to wear pink for breast cancer awareness.

Offensively, the Wolves have the edge over East Central on paper as Co-Lin averages 306.0 yards per game to the Warriors’ 264.4. The bulk of Co-Lin’s yardage this season has come through the air as the team averages 230.6 yards passing to just 75.4 rushing yards, while the Warriors tend to have a different approach with just 107.6 passing yards a game and 156.8 rushing yards. Danny Clark continues to lead Co-Lin from the quarterback postition. The left handed signal caller has 1,153 yards through five games with nine touchdows to four interceptoins. Holden Edwards will most likely be under center for East Central. The freshman as connected on 64.2 percent of his passes, but has only thrown for 528 yards this season. Edwards has thrown six touchdowns to six picks.

Drexlan Allen and JJ Jernighan are still Co-Lin’s go-to running backs. The pair has nearly identical stats with Allen racking up 178 yards on 46 carries, while Jernighan has 172 yards on 47 looks. Lakenith Thompson jumped in the rotation last week against Gulf Coast and posted a touchdown and a 26-yard rush, adding yet another talented back to the Wolves’ backfield. The Warriors’ rushing attack is led by JD Martin and Marq Qualls. Martin has 386 yards on 63 carries and two scores, while Qualls has 294 yards and two touchdowns on 76 carries.

Defensively, Khehlan Kennedy leads Co-Lin with 32 tackles on the year. Hayden Hill is next with 29 after a strong 12-tackle performance against Gulf Coast. Tyrus Wheat has 27 tackles, while R’Tavius McGee rounds out the defensive leaders with 26. Wheat leads the team in tackles for loss with five, and in interceptions with three. The standout sophomore also leads the pack in forced fumbles and recoveries with two of each. Jordan Davis leads Co-Lin with three sacks on the year. The Warriors’ defense is led by Elijah Keyes with 39 tackles, while Joshua Ratcliff leads the team with five sacks. Co-Lin has allowed 235.2 yards per game to East Central’s 313.2.

Overall, the Wolves seem to have an advantage Thursday from a statistical standpoint and Co-Lin has not lost to East Central since 2008 in a 35-28 overtime thriller; however, every matchup in the MACJC South Division is a challenge and this week will be no different.

Spend a little time with Mississippi native and journalist Wright Thompson and it’s not hard to understand how he gains... read more