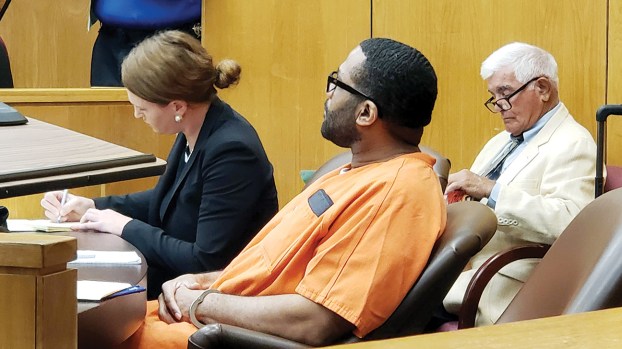 A Lincoln County circuit judge delayed hearing a motion to reset Willie Cory Godbolt’s capital murder trial to later next year until he can speak to the attorney who may be joining the defense team as a replacement.

Judge David Strong said Wednesday he would not hear the motion until he could talk to public defender Thomas Fortner about his schedule. A date for the next hearing was not set.

Fortner, a Hattiesburg attorney, could replace former Lincoln County Public Defender Jason Tate as co-counsel in the case. Tate resigned from the LCPD office in July.

Allison Steiner with the capital defense counsel division of the state public defender’s office filed the motion Friday, requesting it be heard Wednesday when Godbolt would be in court for jury questionnaire discussion. The defendant is being held in the Copiah County jail.

Godbolt, who is accused of killing eight people in May 2017, sat quietly for the nine-minute hearing that was also attended by several members of the victims’ families.

In Steiner’s motion, she argued that Godbolt, an indigent defendant, must be appointed “a defense team capable of providing effective representation consistent with the guidelines for such representation.”

She said the Feb. 10, 2020 date, when set by the court, appeared to be a target they could hit, but now that Tate has left the team, it will be impossible to find someone with the experience and training required by the Mississippi Rules of Criminal Procedure to serve as co-counsel in a capital matter who can be ready in time for trial.

“The circumstance changed materially, however, when Mr. Tate unexpectedly and without prior notice to the rest of the defense team for Mr. Godbolt, resigned from his position as a Lincoln County Public Defender and ceased to participate in Mr. Godbolt’s defense,” she wrote.

When Tate resigned, the defense team filed a motion seeking the appointment of a qualified and effective co-counsel for the defense since the attorney who replaced Tate at the LCPD office does not meet the qualifications to serve in a capital murder case.

The court at that time authorized Steiner to find someone suitable to serve as co-counsel.

She secured a conditioned agreement from Fortner to accept co-counsel but only if the trial date can be delayed several months.

She said it was “unreasonable under the circumstances of this case to expect that any attorney with those capabilities could practically, and even ethically, agree to take such an appointment with the February 2020 trial date in place.”

Steiner said while the state may be ready to go forward with the case and the arrangements have been made for courthouse space in Desoto County for jury selection, “the constitutions of the United States and Mississippi require that those understandable interests cannot trump the rights of the defendant to due process, counsel, compulsory process and to prepare for and present an adequate defense.”

Steiner said a conviction obtained without the defense given sufficient time to prepare would not be fair.

In his affidavit filed with the Steiner’s motion, Fortner asked for the case to be pushed back several months. He is involved with four death penalty cases as either lead or co-counsel, trials in two non-death penalty homicide cases and has obligations with his law practice, he said.

He said after a preliminary review of the state’s case against Godbolt, it is “impossible to come up to speed as an effective co-counsel in the time remaining between now and the present trial date, especially since the court has already determined not to sever the counts for trial purposes. The indictment includes 12 felony counts, and will involve multiple witnesses both lay and expert, as to each count. Eight of the counts are homicides occurring at three different physical locations with distinct factual circumstances that are likely to be of significance to both the culpability and if necessary penalty phases of any trial. The death penalty is being sought in four counts, at least one count occurring at each of the three principal locations. The discovery is also massive — hours of recorded interviews and statements, huge compilations of data downloaded from several electronic devices owned by multiple people, and over 2,300 pages of documents produced to date.”

A lift station at Wesson’s wastewater treatment facility is no longer moving wastewater from lower to higher elevations, and must... read more