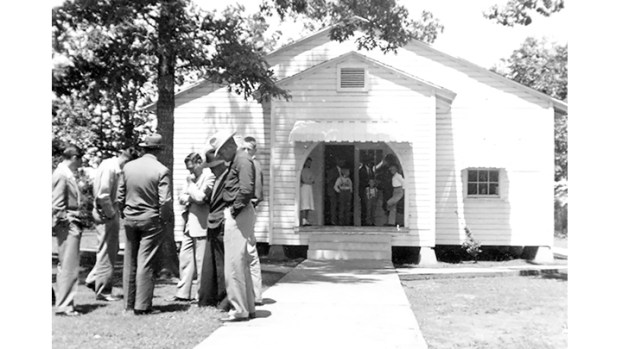 Photo submitted Mt. Zion Church of Christ will celebrate its 125th anniversary Sunday at its home on George Trail. Pictured are members of the congregation outside the church building sometime in the 1950s.

From humble beginnings under a brush arbor to its present location on George Trail, Mt. Zion Church of Christ has served its members and the community for more than 12 decades.

The congregation invites the public to help celebrate Mt.  Zion’s 125th anniversary in Brookhaven on Oct. 13.

Worship starts at 10:30 a.m. Women of the church will provide lunch in the fellowship hall after worship, and a video presentation will show pictures from throughout the years. A song service starts at 2 p.m. and includes a presentation on the history of the church.

Guests of honor include two ministers with close ties to Mt. Zion.

Guest speaker will be Bro. Wendell Davis, who first came to the Brookhaven and Lincoln County area in the late 1950s, and has worked with several congregations of the Church of Christ.

Guest song leader will be Bro. Doug Kimble, who was Mt. Zion’s minister for 11-1/2 years before Lofton became the minister. Kimble worked with the congregation from 1992 to 2003, and now works with the Johnson Grove Church of Christ in Bogue Chitto.

Lofton, who’s been the minister for more than 16 years, said the church’s biggest accomplishment is unity.

“A lot of congregations have problems and difficulties, but this congregation is just very unified, with very few problems,” Lofton said.

The congregation also is a giving group of people who help others, including people who are not members of Mt. Zion, he said.

Mt. Zion Church of Christ had its early beginnings in 1894, when Bro. N.L. Clark and several men met at the Johnson Grove School on the second Sunday of that October, and decided to start a Church of Christ. Mt. Zion would become the oldest congregation among Churches of Christ in Lincoln County.

Bro. Clark conducted the first gospel meeting in the community under a brush arbor in the summer of 1896. The brush arbor was on land owned by Victor Lard (later spelled Laird), who donated four acres in October 1896 for a small-framed church building.

The building was later destroyed by a storm. The congregation met at Johnson Grove until another building was constructed, with several men doing the work.

Clarence Dixon gave the church a few acres of land to construct a larger building across the street around 1940. Bro. Rufus Case, who owned a sawmill, donated the lumber. Several church members helped Louis Watts, a carpenter, build it.

That new church had some notable highlights. It no longer had two rows of benches, like other small churches — it had three rows of pews.  Also, benches were also placed on each side of the pulpit. Those benches were called the “amen corners.”

Through the years, the building was renovated and had additions and improvements twice.

Termites finally took their toll and the building was torn down. During construction on its replacement, the congregation met in a fellowship hall that had been built on the site where the first little churches stood.

Rodney King, a Mt. Zion member and a building contractor, and his crew constructed the new building in 1995. It is where the church still meets today.

Bro. Buford Steward led the congregation from 1960 to 1978. Bro. Tim Hutton helped for about a year in the 1970s. Bros. Terry Vaughn and Marcus McCormick were ministers during the 1980s.

Mt. Zion has a two-acre cemetery across the road from the church. Four or five generations of Lofton’s family are buried in it.

Lofton and his wife Sharon have a grown son and daughter who are each married.

Their daughter and her husband have a son and a daughter who are elementary school-age students. The family lives in Brookhaven and both the mom and dad teach at West Lincoln.

The Loftons’ son and his wife live in Collierville, Tennessee.

Many in the community know Sharon Lofton as justice court clerk for Lincoln County.

Ronnie Lofton said he loves leading a giving church that cares for others.

The church sponsors a Soup Supper for senior citizens in February. Church youth help set up and wait tables.

There’s a fall festival, usually the last weekend in October, along with a Trunk or Treat, hayrides and food such as hotdogs and hamburgers. There’s also a July 4th ice cream supper.

The church holds a gospel meeting, similar to a revival, every July, an ice cream supper in August and a peanut boil in September.

Ladies of the church meet on Thursdays at 9:30 a.m. for a card ministry that allows them to write notes to people who are sick, who have lost loved ones or are in need of encouragement, Lofton said. The ladies have a Bible study at 10 a.m. Their study this year is called “A Life That Matters.”

Youths meet each Sunday at 5 p.m.

The congregation helps support a missionary family in India, missionary efforts in Guyana and Mexico and Berean Children’s Home.

Warning: No outside burning whatsoever

The ground is still dry in Lincoln County, as well as across the state, so burning anything is not a... read more