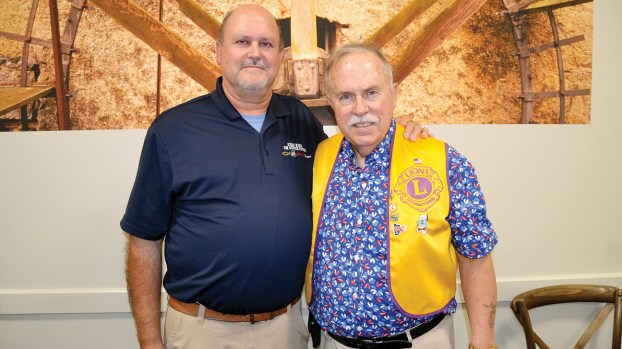 Photo by Aaron Paden Pictured are, from left: Rich Hufstutler and Jim McKennon at a recent Lions Club meeting. McKennon, a friend of Hufstutler and a member of the Lion’s Club, invited Hufstutler to share his testimony at the meeting.

Local businessman walked across the U.S.

Today, Rich Huffstutler works in business development at Stan King in Brookhaven, but there was a time when he was walking across the United States on a mission for Jesus.

His story — which he told at a recent Lion’s Club meeting — begins with a troubled childhood. Huffstutler was originally born in southern California.

“My parents got divorced when I was about 7,” he said. “They got divorced because my dad raped my sister who was 11 years old at the time.”

Huffstutler said his father went to prison, but his mother remarried, and his stepfather was equally abusive.

“My mom couldn’t afford to take care of him and us, and we got placed into boys homes and foster homes and children’s homes,” he said.

Huffstutler went through several homes throughout his childhood. As a young teenager, Huffstutler lived in the LeRoy Boys Home in La Verne, California. There, the children were required to attend church on Sunday.

“If you didn’t go to church, you stayed at the boys home and swept driveways,” he said. “So it kind of behooved you to go to church.”

“John prayed with me and had me accept Christ into my life,” he said. “I learned later, there was a big difference between accepting Christ in your life and letting him lead it.”

After joining the United States Navy, Huffstutler was introduced to drugs and went through a deep depression. After returning home. Huffstutler said he once considered taking his own life. When he was evicted from his apartment, he knew it was time for a change. It was then Huffstutler said he decided he was ready to let God lead his life.

“I realized God had to be able to do a better job with my life than I had,” he said.

Huffstutler began by reading his Bible, looking for advice. In the book of Matthew, Huffstutler found his answer. It told him to go forth into every city and town and spread the gospel, without worrying about tomorrow’s troubles.

On Jan. 1, 1984 in Blacksburg Virginia, Huffstutler began his walk across America.

“God taught me such things as how to be humble, how to be meek and how to present to other people,” he said. “He used me in some tremendous ways.”

Huffstutler started his journey with next to no money — just the 50 cents in his pocket, and not much of anything else. He visited churches across the country, sharing his testimony. During that time, Huffstutler says he was well provided for.

“The walk across the country took two and a half years,” he said. “Never once did I go hungry. God supplied me with everything I needed — food, clothes and a good backpack.”

That walk ended in the summer of 1986. In 1997, he decided to go on a second walk for Jesus, this time starting in Hastings, Minnesota, and continuing south down the Mississippi River. It was on that journey, in the Mississippi Delta, that Huffstutler met his wife, Shann. At the time, Huffstutler said he had no plans to settle down in Mississippi, but Mississippi is where he found a family.

Huffstutler lives with his two children. He said they’ve never experienced the kind of hardship he did growing up, and he’s glad for it. He attends New Life Church in Monticello. To him, his family is a blessing.

“When your mother and father forsake you, God will take you up,” he said. “To make a long story short, God is alive and well on this planet Earth.”

The Lions Club where Huffstutler shared his testimony is a service organization that supports a variety of local non-profits. They also have a sight program providing vision screening for over 3,000 students in Brookhaven in Lincoln County.

Trust your tastes with annual fundraiser

Tickets to one of the tastiest events in Brookhaven go on sale Thursday and the organization behind it is hosting... read more