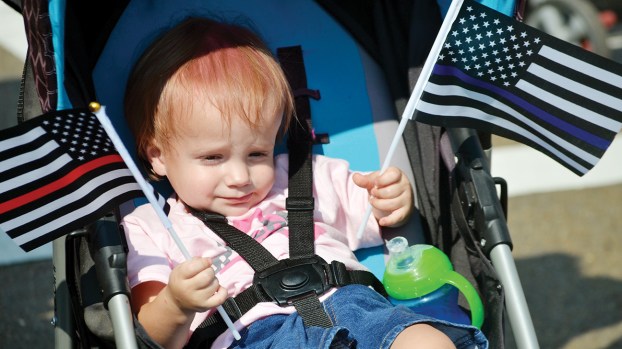 Photo by Donna Campbell Jaxon Reeves waves a “thin blue line” American flag for police officers and a “thin red line” American flag for firefighters Saturday at the Warriors of the Badge booth at the Ole Brook Festival. Jaxon’s grandfather, Steve Reeves, will participate in the Honor the Fallen Poker Ride this Saturday. Registration begins at 8 a.m. at Easthaven Baptist Church.

The day after Zach Moak would have turned 32, his friends and family, along with a few people who never got the chance to meet the Brookhaven police officer, will ride in his memory in the Honor the Fallen Poker Run.

The inaugural event Saturday is a fundraiser for Warriors of the Badge, an organization started by Moak’s mother, Vicki, after her son was killed just over a year ago while answering a call of shots fired. Cpl. Zach Moak and patrolman James White were both shot and killed that day.

Though it’s held just after her son’s birthday, she didn’t want the run to be named for him.

“We will always remember. Brookhaven will always remember the officers they lost, but there are many everywhere else. We don’t want to put it like it’s just for them (Moak and White), it’s for them and for everybody else we’ve lost,” Vicki Moak said. “(It’s for) every department in every state that has lost. We are riding for everybody. Even though we may not name them, that’s who we are honoring, everybody who has fallen, all over the United States, who gave their lives to protect their community.”

Registration begins at 8 a.m. at Easthaven Baptist Church on Hwy. 84. The run is open to motorcycles, cars and trucks and includes five stops. Participants are encouraged to decorate their rides.

Poker hands will be sold at registration for $20 a hand with a limit of three hands. Each participant draws one card per hand at each stop for a five-card hand. The winning hand at the finish earns a $200 prize.

T-shirts and lunch tickets will be available for purchase at registration. T-shirts are $20. Lunches are pulled pork sandwiches, chips, dessert and beverage for $5 and will be waiting at the finish line at the Brookhaven Building at 1154 Beltline Dr.

The run will leave Easthaven at 9 a.m. and travel Hwy. 51 past the police station to Brookway Boulevard, then take East Monticello Street through downtown Brookhaven. It will turn right at First Baptist Church Brookhaven and take South First Street to Hwy. 84. The run will make stops in Monticello, Ruth and Enterprise before ending back in Brookhaven.

The first card will be drawn at Easthaven, the second at Atwood Water Park, the third at Ruth VFD, the fourth at Enterprise Attendance Center and the fifth at the Brookhaven Building.

Vicki Moak said the poker run came from an idea offered by Brookhaven Police Sgt. Jonathan Alford. He suggested a motorcycle ride around Zach Moak’s birthday and a poker run as a fundraiser for the organization that gives financial assistance to the families of law enforcement officers, firefighters and emergency medical services personnel nationwide who are killed or critically injured in the line of duty.

“I’m hoping it will be big,” Vicki Moak said. “And I’m hoping this will be one of the things we’ll make an annual event, that around this time every year we’ll do it. I think this will be something that everyone will enjoy each year and look forward to.”

Local businessman walked across the U.S.

Today, Rich Huffstutler works in business development at Stan King in Brookhaven, but there was a time when he was... read more