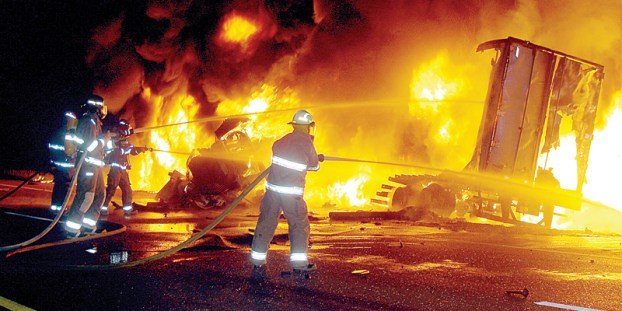 Lincoln County’s fire coordinator is recruiting firefighters for the eight stations he oversees, however, applicants don’t necessarily need to be able to fight fires.

Clifford Galey, who is also the emergency management director for the county, told the Board of Supervisors this week that he’s working with the state fire coordinators’ network to get the word out to the public about the statewide need for volunteer firefighters.

Finding individuals willing to serve without pay for the greater good of their community isn’t easy.

“It’s just very hard to do, and not just in Lincoln County but all over the state,” Galey said.

“I tell you what boys, the ones that have been in there for years is burnt out,” he said.

“It’s getting harder and harder to get volunteers,” Galey said. “It’s mostly because they’re not here.”

He’s president at the East Lincoln VFD and has several on his rolls that aren’t available much of the time when the alarm sounds.

“I can name nine or 10 of them right off the top of my head that travel around the country working. They carry a pager or a radio in their home and they come, but you know how that goes, they’re not home a lot,” he said.

“It’s going to be a problem,” Williamson said.

“It’s coming to be,” Galey replied.

The older volunteers who are available to answer the majority of calls have been doing it for so long, they’re ready to retire. But unfortunately, there are not a lot of hands to pass the fire truck keys to.

“The younger folks in areas like ours have to go off to make a living and it’s really hard to recruit them for the little bit of time that they’re home. But, I understand them wanting to spend time with their families,” Galey said.

It takes a huge commitment to be an active member of a volunteer fire department. There are classes to pass, meetings to attend, continuous training to undergo and fundraisers to organize and work to pay for the trucks and gear that isn’t covered in the budgets. Then there’s the time spent running to emergencies at all hours in a personal vehicle on their own dime.

“It’s actually a 24-hour day, 365-day-a-year job,” Galey said. “Once you become a firefighter, you’re representing the fire department and the county you belong to and you’re always on call.”

Galey would like to see at least 30 to 40 firefighters on the roster at each of the eight fire departments — East Lincoln, Ruth, Heucks Retreat, Loyd Star, New Sight, Bogue Chitto, Hog Chain and Zetus, which has three stations.

“The more firefighters you have at a department, the more likely you are to have at least 10 respond to an emergency, he said.

“If you go to any type of fire, grass and woods, or a structure fire of any kind, without 10 firefighters there you can’t hardly do your job,” he said.

Being a firefighter is a calling into public service. But not everyone who volunteers at a fire department has to run into burning buildings. There are jobs available for various levels of commitment and training.

Some people help with hoses. Some become pump operators.

“Every station needs somebody to sweep floors and cut grass and start the trucks every week or so, do paperwork. You don’t have to get out there in the turnout gear and fight fires to be a firefighter. It takes a lot more,” he said.

Local heroes fighting for a cure for Alzheimer’s