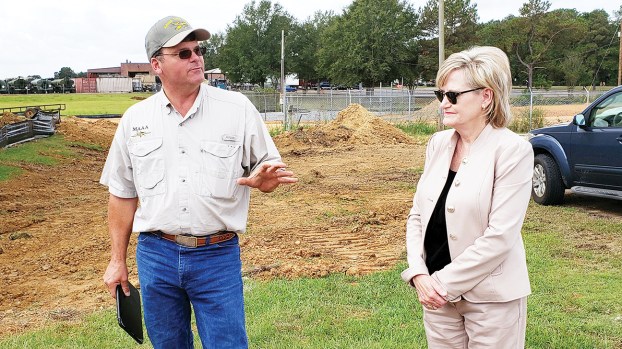 U.S. Sen. Cindy Hyde-Smith chose her home turf to meet with a representative of Alliance for Aviation Across America and to show off the Brookhaven-Lincoln County Airport.

Hyde-Smith, along with Sen. Roger Wicker, both Republican senators from Mississippi, announced in July that the airport would receive a $190,000 Federal Aviation Grant through the U.S. Department of Transportation.

The city embarked on a 20-year, $12 million airport improvement plan in February.

The airport board of directors and city leaders met Friday with Hyde-Smith and alliance representative Ernest Baynard to discuss some of the improvements planned.

Baynard, who is with the national non-profit, non-partisan coalition based in Washington, D.C., said smaller airports are a vital lifeline to communities.

“They provide such and important role in day-to-day life, particularly in areas that are not near hubs. We wanted to make sure there was a strong voice for those that depend on airports like this,” he said.

Hyde-Smith said aviation is part of the overall global economy and would like to see a younger generation set their sights on the skyline. She’d like to see area schools participate in field trips to the airport in Brookhaven so children will be exposed to aviation careers.

“We haven’t done a very good job of exposing our students to this world,” she said. “I want the students — elementary, junior high, high school, whatever age we decide to target — to have the opportunity to come out here, let a pilot speak to them, let them see a plane land, let them know the opportunities of aviation.”

After the meeting, Hyde-Smith toured the construction area where a new hangar pad will be built. Engineer Ryan Holmes with Dungan Engineering laid out the plans for the airport.

They plan to extend the taxiway, replace antiquated hangars — made of block and sheet metal — with new ones and move the two 10,000-gallon tanks in the fuel farm to a safer, more convenient location.

A 1,800-square-foot terminal building that includes the airport manager’s office, a waiting area, conference room, flight planning area and restrooms will be rebuilt near the front gate to. In 2021, they’ll rehab the runway.

“The longer the runway, the larger the aircraft that you can accommodate, which means more business,” Baynard said.

Karl Holcomb of Holcomb Flying Service of Flora met with the senator, Baynard and the board. The agricultural pilot explained to them the need for airports like Brookhaven’s for people in his business. Southwest Mississippi has a lack of row crops that need dusting, but there’s an abundance of timber.

“In the winter time you’ll see airplanes like mine working off of this airport, and we’re going off and fertilizing trees,” he said. “Then in the summer time and the fall, you’ll see helicopters out there spraying tracts that they’ve just clearcut getting ready to plant in the fall or they’ll be spraying in the spring to go out there and kill the vegetation that grows (around the trees.)”

That resonated with Hyde-Smith.

“Agriculture is the No. 1 industry in this state. And it is so important that we have the facilities that they can work out of throughout the state,” she said.

Joshua Butler pleaded guilty this week to armed robbery and was sentenced to 20 years, with nine suspended and 11... read more