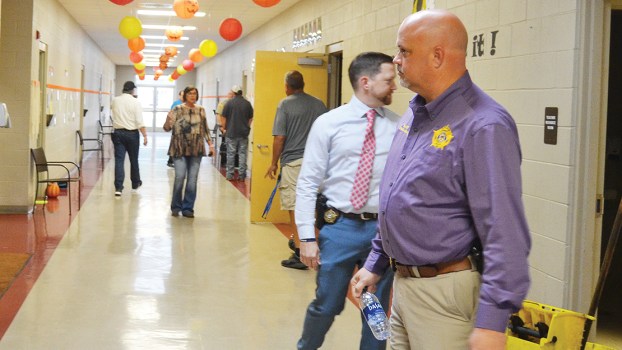 Lincoln County deputies combed over the campus of Enterprise Attendance Center Monday, looking for teachers and administrators to “shoot.”

It was a simulation in which law enforcement acted as active shooters to help train school staff in the event the situation ever happens for real. The simulation took place Monday while students were out for fall break.

The training is part of new state requirements that districts have active shooter drills every semester. Even before the law passed in March, many schools already performed active shooter drills. Principal Terry Brister said it was particularly important for attendance centers to hold the drills because the layout of the county schools poses unique challenges.

“We don’t want to wait until it happens,” Brister said. “Our campuses are unique, the way they are laid out. There are so many scenarios you can have — so many entrances — and we try to do the basic things you can do. The best way to do that is have the emergency people come, lay it out, and tell you what to do.”

Lincoln County Sheriff Steve Rushing said that while his department has taken classes to prepare for active shooter situations, having a clear knowledge of the school layout is an important factor in their response.

“That’s the reality we live in nowadays,” Rushing said. “We have to address these types of incidences.”

On Monday, deputies took the roles of active shooters, going from building to building, hall to hall and door to door. Employees who deputies were able to reach were taken out of the simulation — killed by a hypothetical shooter.

The drill, while it may have bordered on the macabre, served a dual purpose. It gave teachers and administrators the opportunity to train for the possibility of an active shooter, and it gave the sheriff’s office an opportunity to scout out the school’s security measures, finding cracks and weaknesses, he said.

Following the drill, administrators held a meeting with the sheriff, deputies and Emergency Management Director Clifford Galey to discuss weaknesses and to brainstorm solutions.

“It was very constructive,” Brister said. “Everyone had input.”

Brookhaven’s Maxine Minter was known for many things, but especially over the last 14 years of her life as an... read more