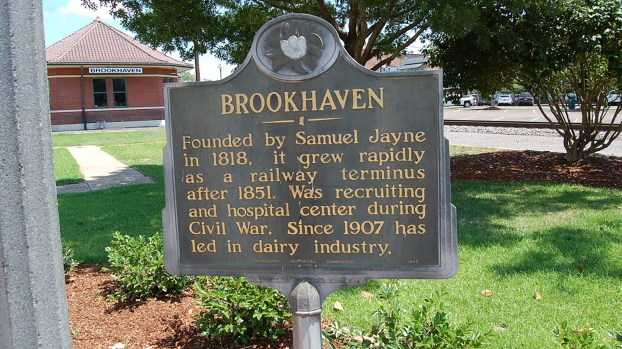 Brookhaven author Brianna Moore-Christa will unveil some mysteries in a free program, “The Unjust History of Samuel Jayne,” in a presentation today for the Lincoln County Historical and Genealogical Society.

The 6:30 p.m. program about the city’s founder will be at the Jimmy Furlow Center, and will tie in with Moore-Christa’s upcoming book. “Theatre of War” will be released this month.

Moore-Christa will talk about what her research has uncovered on Jayne, whom she describes as “a true frontiersman and yeoman.”

Jayne and his two brothers had moved to Mississippi with next to nothing on former Choctaw Indian land in the early 1880s. They were sons of an American Revolution veteran. Jayne settled the village of Brookhaven, or “Ole Brook,” on the Bogue Chitto River, in 1818. He and his settlers later moved nearby to where a railroad was built, and took the village name with them. Jayne had named the town for his hometown in Long Island, New York.

Three years ago, Moore-Christa began researching Milton Whitworth, the founder of Whitworth College, and the school’s history. Whitworth has generally been credited with bringing the railroad to the city that Jayne founded.

Her research from the Lincoln County Historical Museum and Sue Dorman “changed everything,” she said.

Dorman told her the two men had feuded over the railroad’s location.

“I’d always had a certain misconception about Samuel Jayne that turned out to be completely wrong, and inexplicably, it was because of Milton Whitworth,” Moore-Christa said.

The railroad opened in 1858 around the time Whitworth founded the Whitworth Female College. The college was later used as a Confederate hospital. Brookhaven later bought the campus, now used as the Mississippi School of the Arts.

The railroad linked Brookhaven to Memphis and New Orleans, bringing a bustling rail business first by cotton, then by lumber.

The railroad was about 1.5 miles from Jayne’s original settlement, where he’d bought 160 acres. Settlers began moving closer to the railroad tracks.

Moore-Christa’s research shows that Jayne and Whitworth had “a twisted relationship.”

Jayne was highly-respected and well-educated. He spent his life trying to make his fortune in Mississippi, she said.

“Whitworth, on the other hand, was fabulously wealthy, but not nearly as educated Jayne, and he was far from a self-made man.”

Mississippi was a new frontier state when each of them arrived.

“It was very much the Wild West,” she said.

Whitworth was involved with the Hoskins’ Battery, and the men had “a lot of what I like to call ‘wild times’ during the Civil War.

“I think people are going to be excited to read about their antics in detail for the first time,” Moore-Christa said.

“I’m fortunate that the internet has made many older resources more accessible, like first-hand accounts from members of Hoskins’ Battery published in Confederate War journals of the late-19th Century.”

Her book tells the story of the rivalry between Jayne and Whitworth in the decade before the Civil War. She says it chronicles “the early years of Mississippi’s colonial period through the early Reconstruction with a no-holds-barred narrative that follows the social and political turmoil of the period and the influence both Jayne and Whitworth had on both and with each other.”

The book also covers the Hoskin’s Battery during the Civil War, and its efforts in Mississippi, Alabama, Georgia and Tennessee. The battery also was known as the Brookhaven Light Artillery Battery.

Moore-Christa is a published novelist, though “Theatre of War” is her first non-fiction book.

She has published two science fiction novels under the pseudonym Anthony Rivers. The novels are based on the legends of King Arthur.

Moore-Christa plans for “Theatre of War” to be the first in a trilogy of works about the history of Whitworth College.

She will donate proceeds from “Theatre of War” to the Mississippi School of the Arts.

Good jobs require education, training and a foot in the door. Copiah-Lincoln Community College works to provide all three. On... read more