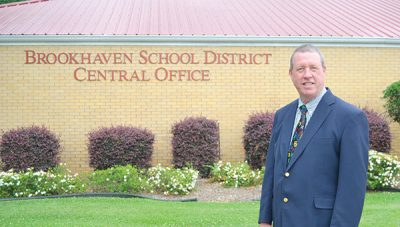 Brookhaven School District Superintendent Ray Carlock plans to retire when the school year is up in June so he can travel and spend more time with his family.

Carlock, 58, made the announced Tuesday night following a meeting of the Board of Trustees.

“I submitted my letter of retirement effective June 30, 2020,” Carlock told The Daily Leader in a text message after the meeting. “This completes four years at Brookhaven and I have enjoyed my time here. I am looking forward to retirement, travel and spending time with my grandkids and family.”

Carlock began his tenure at Brookhaven July 1, 2016 following an announcement of his selection in February of that year. He came to Brookhaven from the Franklin County School District, where he had served as superintendent for four years. Carlock applied for the job after speaking with then-Superintendent Ben Cox, who retired in June 2016.

“The members of the school board have enjoyed our four years with Mr. Carlock and what we have accomplished during that time,” said Board President Lucy Shell. “Mr. Carlock has been a valuable asset to the school district and we wish him the best in his retirement.”

The Brookhaven School District earned a C on the state report card in 2019, 2018, 2017 and 2016, according to Rob McCreary, director of federal programs for the district. That is up from a D in 2015. While superintendent in Franklin County, the district jumped from a C to a B rating. He hoped to achieve a similar improvement in Brookhaven, he said when he was hired.

“The progress the district has made has been due to the hard work of teachers, students, and administrators,” Carlock said of Brookhaven. “Data has shown that the district is moving closer every year to achieving a B accountability rating. Brookhaven School District will continue to improve under the leadership of our outstanding school board and the new superintendent.”

McCreary said Carlock has been a visionary for the district staff and administrators.

“He’s been a true leader to our group. He’s made us look at our areas that we need to improve on and led us in the direction that we to go in the district,” he said. “I’d love to see somebody with a vision to take the torch from Mr. Carlock and move forward. He’s done a great job leading us. He’s set down the foundation for someone to take it on and move forward with it.”

Shell said the board is starting its search for Carlock’s replacement.

“We are beginning the process to look for a new superintendent, but have not finalized any procedures at this time as the announcement was made official as of Tuesday,” she said. “Brookhaven School District is a great school district that strives for excellence in education and for preparing our students for the future. Mr. Carlock will be hard to replace as he has worked diligently to maintain these goals, but the school board will be working on the superintendent search in a timely fashion.”

Carlock and his wife, Janet, are building a house in McCall Creek. Janet Carlock was formerly on staff with the Brookhaven School District, but retired last year.

A veteran of Operation Iraqi Freedom, Carlock is a colonel in the Mississippi Army National Guard and a member of the American Legion, Veterans of Foreign Wars and Gideon’s International.

He calls Brookhaven students “the lifeblood of the community and the school” and says they prove how special they are through their performance in academics, arts, and athletics.

“BSD constantly reminds everyone what true excellence in education is all about when we say ‘We are Ole Brook.’ It is truly more than a tradition, it is a way of life for Brookhaven School District students and staff,” he said. “I have personally been blessed to be a part of this community and school district.”

Lisa Karmacharya, who was hired in 2011, resigned as superintendent in June 2013 with two years left on her contract after heavy criticism by faculty and low performance in the state accountability ratings. Two days later, Stephanie Henderson was unanimously voted in as interim superintendent. She served seven months until Cox was hired.

Firefighters from the Brookhaven Fire Department visited with young children Wednesday as part of the Community Helper series that is... read more