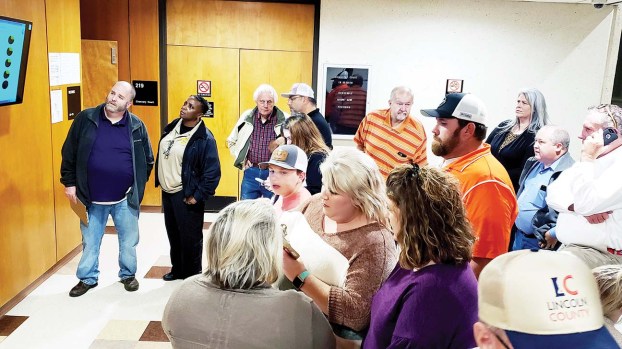 Most incumbents win in Lincoln County

Several incumbents will keep their seats in Lincoln County according to unofficial results from Tuesday’s general election.

At least 10,500 voters went to the polls in Lincoln County and another 724 voted absentee, according to unofficial results. Circuit clerk workers were still tabulating absentee and affidavit votes at press time late Tuesday.

In the Post 2 Justice Court Judge race, Republican incumbent Roger Martin defeated Democrat Valerie Moore, 3,131 to 1,907. That’s 62.05 percent of the vote. This will be Martin’s second four-year term as judge.

“I just appreciate all the support, all the votes, all the prayers mainly,” Martin said after the last precinct’s votes were counted. “We will just keep doing what we’re doing and be fair to everybody. Treat everybody the same, no matter what, you apply the law. Law is easy, you just have to apply it. “

Democrat incumbent Jerry L. Wilson held on to his seat in the race for District 1 supervisor. Wilson received 1,342, or 72.62 percent of the vote. Republican Dwayne Gill received 504 votes.

Boyd has served 22 years as constable. He expects he’ll retire after this next four-year term, he said.

“I appreciate everybody that voted for me and I’ll keep on working for them just as hard as I ever would,” he said.

Republican Jerry McGehee will be the new District 2 Supervisor taking 61.48 percent of the vote and beating Democrat Cynthia Price and independent Roland Robinson. McGehee received 1,200 votes to Price’s 707 and Robinson’s 44.

Several races were not decided Tuesday night at press time.

In the District Attorney’s race, Republican Joey Norton of Brookhaven received 6,531, or 62.76 percent, of the vote in Lincoln County. Democrat incumbent Dee Bates received 3,869 votes. However, it appeared Bates took Walthall County in unofficial results, 66 percent to 34 percent. At 10 p.m. Tuesday, only 13 percent of the precincts in Pike County had been counted. About 970 absentee votes were still left to count as well.

In the District 53 House of Representatives, Republican Vince Mangold took 54.43 percent of the vote, 2,384 to Democrat Rita Wilkinson Goss’ 1,993 to hold on to Lincoln County. However, with results from Franklin, Lawrence, Pike and Jefferson Davis unavailable, that race was still undecided at press time.

In the special election for Lincoln County School Board Education District 3, Perry S. Brown received 380 votes, while Brian D. Magee received 308 and Barbara F. Buie received 188. However, with more than 700 absentee votes still to be counted at press time, that race is undecided Tuesday night.

An investigation by multiple agencies is continuing Tuesday a day after the Lincoln County School District became the victim of... read more