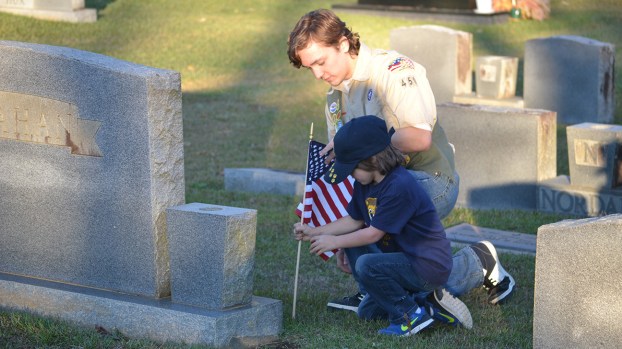 Daily Leader file photo Scouts place flags at the graves of veterans at Wellman Baptist Church Cemetery. The American Legion will be at Rosehill Cemetery at 8 a.m. Saturday and are looking for additional volunteers to show up and help place flags. The group will also be placing flags at Easthaven after finishing Rosehill.

American Legion Post Commander: ‘It honors all of our veterans’

The American Legion is looking for volunteers to help lay flags in preparation for Veterans Day.

“We feel that it honors all of our veterans when we do that,” he said.

Reeves and his team of volunteers will be at Rosehill  Cemetery starting at 8 a.m. Saturday and continuing to Easthaven afterward. Between the two, Reeves said there are about 400 flags to place. The only thing anyone needs to do to volunteer is show up, according to Reeves, and the more the better.

“The fewer people you have, the longer it takes,” Reeves said.

“We have several church cemeteries where people have volunteered to put flags out for us,” Reeves said. “If any of these churches want flags for their cemeteries and they have someone that will promise us they’ll put them out, we’ll supply the flags.”

The American Legion is a veterans organization chartered in 1919. It’s open to those who have served honorably in the United States Armed Forces.

“We’ve gotten some new members,” he said. “We’re kind of eager to work.”

The Brookhaven School District announced this week that it has officially begun a search to replace retiring superintendent Ray Carlock.... read more