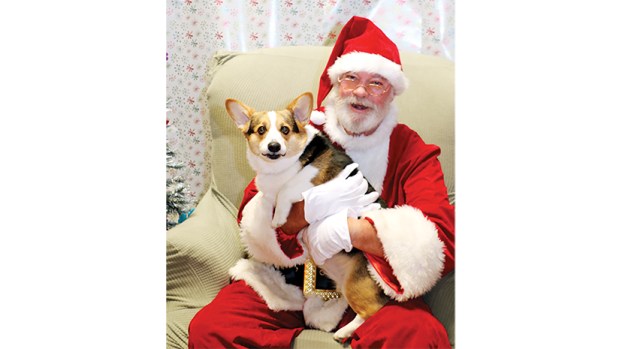 Photo submitted BARL’s Pet Photos with Santa event will be Saturday, 10 a.m. until 12:30 p.m. at PetSense.

Picture your pets with Santa this season

Santa Claus is donating his time to the Brookhaven Animal Rescue League this year to help out with one of its annual fundraisers, so now is the time to teach your dogs and cats how to say “cheese.”

Santa will be at PetSense on Brookway Boulevard Saturday from 10 a.m. until 12:30 p.m. for pet photos.

Photographer Jeanne Wroten donates her time to the organization, which operates a no-kill shelter.

“It’s a really good way that I can help out as part of their outreach of finding pets homes,” Wroten said. “That’s one small thing I can do.”

Wroten said that BARL representatives will be on hand to help keep the animals happy and corral them into position, and taking the photos is a matter of patience. She’s been doing photography for the event for several years now, and she’s seen a lot — including a goat one year — but she said it’s always been fun.

Often, Wroten said, people will make a tradition of bringing their children to the photo shoot as well.

“You can see the kid and the pet grow together,” she said. “I enjoy doing it every year.”

During the Pet Photos with Santa event, BARL will also be hosting a rabies vaccination clinic. Dr. Stacy Gowan of Copiah Animal Hospital will be on-hand to administer the vaccines, which are $7.

Photo packages start at $10, and will be available for pickup on Monday.

Money from these two fundraisers will directly benefit BARL, a 501c3 nonprofit.

All BARL animals are wormed, vaccinated and spayed/neutered. Dogs are also micro-chipped.

Anyone interested in adopting, contributing or volunteering should contact BARL at 601-757-4367 or info@barl.net.  Donations are tax deductible and may be mailed to BARL, P.O. Box 3477, Brookhaven, MS 39603.

Many of BARL’s adoptable animals may be viewed online at www.barl.net.

Even while Lincoln County supervisors continue improving roads and bridges this year, they’re working on the 2020 list to be... read more