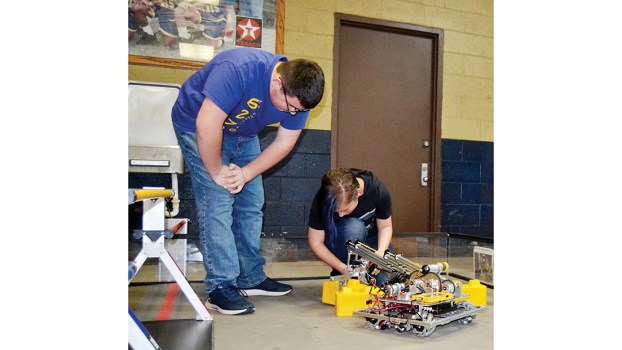 The Bogue Chitto Technocats are gearing up for competition — literally. The team of robotics enthusiasts will be taking its BC-3PO robot to Oxford on Dec. 7 in a regional FIRST Tech Challenge.

In the competition, teams have their robot navigate obstacles and pursue an objective. To keep teams on their toes, FIRST Tech Challenge changes the objective, the technical requirements for the robot and the obstacles every year.

To design and build a robot, students develop a wide variety of marketable skills. Plastic components are designed by the students using Blender — a 3D modeling program — and printed out with a 3D printer.

Requirements for the robots change from competition to competition, but for the upcoming contest, the robot is controlled by two mobile phones. One device, mounted on the robot, acts as the controller. The second is hooked up to two gamepad controllers and acts as a driver station.

The second choice for more experienced users — the choice the Bogue Chitto team has opted into — is to program the robot with Java. Java, used for programming Android applications, is commonly-used in the tech industry.

All of the students in the Bogue Chitto Robotics Team are directly involved in designing the robot, but that’s only one part of the competition.

“You can get really good with the robot, but you’re still only one-third down,” Reggie Wise said. Wise co-sponsors the team, along with Wendy Cawthorn.

There are currently five members of the Bogue Chitto robotics team. It’s a tough group to get into. According to Wise, it has to be. It’s a real investment in time that requires dedication from its members.

In addition to maintaining a website — www.technocats.us — building and testing and iterating on a robot, writing documentation and preparing for an interview, the team also raises its own money — something that has gotten more difficult as the team has improved.

“The more experience you get — the better you get at something — the more expensive it is to compete at a higher level,” Wise said.

Despite this, Cawthorn believes that Bogue Chitto will do well in their upcoming competition.

That confidence doesn’t come from nowhere. Last year, in the first time ever that a Lincoln County school went on to compete in a world championship, the Bogue Chitto Robotics team went to Huston to compete against the best teams in the world. There, they placed 47th out of 64 teams.

“Even though we hoped for a better showing, we proved that we belong in the same company as the biggest and best schools around the globe,” Principal Scott Merrell said in a 2018 edition of the Daily Leader. “I cannot express just how proud I am of the teachers and the students that worked so hard to achieve such a high level of success. That’s how we do things at BC.”

An engineer overseeing construction on the North First Street Fire Station said work could be completed by the end of... read more