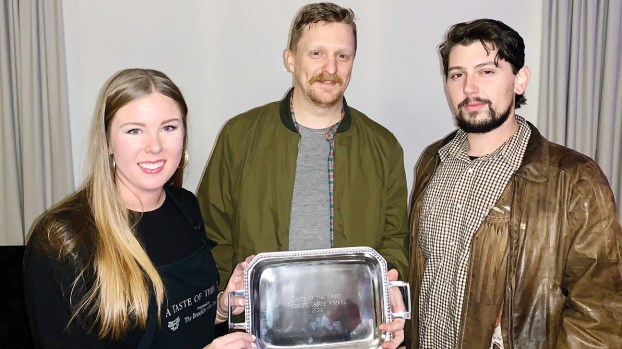 For the second time in three years, Betty’s Eat Shop is the winner of the Taste of the Trust’s People’s Choice award.

“It was a good time,” owner and chef Matt Fitzsimmons said. “It’s always a good event to go to. It’s good for the town and we love doing it.”

The annual Taste of the Trust is a fundraiser hosted by the Brookhaven Trust and proceeds go to preserving the history of Brookhaven, promoting the arts and improving downtown. More than a dozen restauranteurs set up shop at the Brookhaven Country Club with samples of their favorite dishes for tasting, while guests enjoyed the offerings in a party atmosphere. Marvin Curtis and Topher Brown provided entertainment for the night.

President Jillian Ricceri said it was a close competition for the annual award, but ultimately Betty’s Hoppin’ John won people over.

Hoppin’ John has its origins in South Carolina, but Fitzsimmons said it’s been adopted across Southern United States. It’s a dish made with blackeyed peas and rice. Fitzsimmons made a few of his own tweaks along the way.

“We made more broth with chicken and pork stock, and cooked the blackeyed peas and pork belly,” he said. “It turned out well. Everybody seemed to like it.”

The Taste of the Trust serves as the Brookhaven Trust’s only fundraiser for the year.

“We sold over 400 tickets,” Ricceri said. “We couldn’t have done it without the participating restaurants, the country club and all of our sponsors.”

In addition to the People’s Choice award, the Taste of the Trust also holds a silent auction of items donated by the community and local businesses.

“The silent auction was a huge success and all of the indulgences were amazing,” she said.

Since 1991, the Brookhaven Trust has been dedicated to preserving Brookhaven’s heritage and improving its downtown. In its first major project, it raised money to save the Lampton Auditorium in what is now the Mississippi School of the Arts — historically Whitworth College. Since then, the group has continued working downtown.

“Our mission is to improve historical elements of downtown and cultivation of the arts,” Ricceri said previously. “It’s really important to keep Brookhaven’s downtown lively.”

The Bogue Chitto Technocats are gearing up for competition — literally. The team of robotics enthusiasts will be taking its... read more